Just before Christmas I was back at the Noel Coward Theatre in London for the latest in the Michael Grandage Company Season.  This time it was Shakespeare's Henry V, and this time I had a front row seat.

The woman behind me in the queue for the ladies had seen the poster for the Grandage season and, mistaking the group photograph of the main cast in all five plays for the cast of Henry V, was looking forward to the all-star line-up of Judi Dench, Daniel Radcliffe and David Walliams.

Thankfully, none of them were performing that evening as the eponymous king - Henry was in fact played by Jude Law. 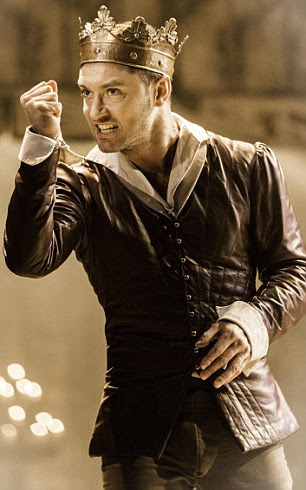 
As King Henry, Mr Law rocked a slimline leather-jerkin-and-lightly-padded-codpiece ensemble, giving the sense right away that this was a king of athletic action, who had the build to pick up a mighty big sword and get right into the thick of any action necessary.  He wasn't just all about the poetry, although he rocked that as well.

And it was just as well that we had this sense of action to keep us going. The first half, acted out on a ginormous, skelftastic wooden cheeseboard of a set (referencing the round 'wooden O' of Shakespeare's Globe theatre), was somewhat sluggish, despite the pruning of half an hour's worth of text.

However, whereas Grandage's recent production of A Midsummer Night's Dream had me pounding a box of Maltesers into dust with frustration at its annoyingly mannered nonsense (and not my own box of Maltesers, it has to be said), here was a back-to-basics Henry without bells or whistles, and all the better for that.

Grandage had cleverly cast Ashley Zhangazha as the Chorus, dressed in modern day jeans and a Union Jack T-shirt.  He acted as a conduit between the modern audience and the dusty old history play, commentating on and introducing the action, as if he had just skateboarded in off the street, his excitement and involvement making Agincourt seem real and relevant.  The Union flag reference also became clear with the later leek-eating Welsh-Scots-English goings on of the second half.

And it was in the second half that things really got going. 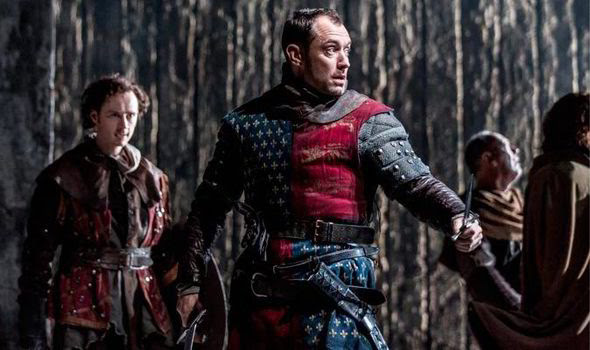 
The second half is largely the Battle of Agincourt, all blokey bonding against overwhelming odds, and Law is in his element.

Whereas James McAvoy played MACBETH as a manic human being fighting his way to the top of the pile in a dog-eat-dog world, and David Tennant played RICHARD II as a gender-bending king who truly believed that he was partly divine, here Law plays Henry as a king who is amongst his people, not above them.

The night before the battle, he puts on a cloak as disguise and moves about the camp to vox-pop the soldiers.  He's one of the lads, and faces the same overwhelming odds and chance of death as they do.  But as King, it is up to him to stand fast and make his inspirational 'we few, we happy few, we band of brothers' speech.  He is the instrument of divine kingship in human form in order to lead his people. 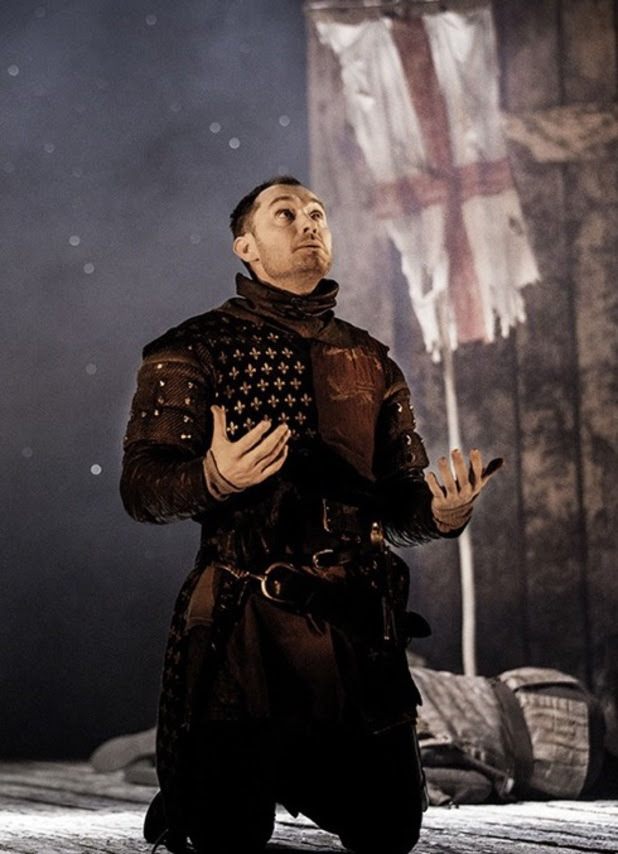 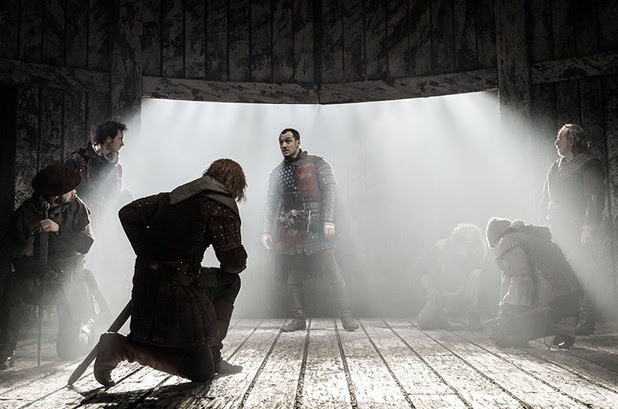 From the front row, you could see that the fight scenes certainly brought out a fair bit of sweating from Mr Law.  It's a genuinely very physical play. 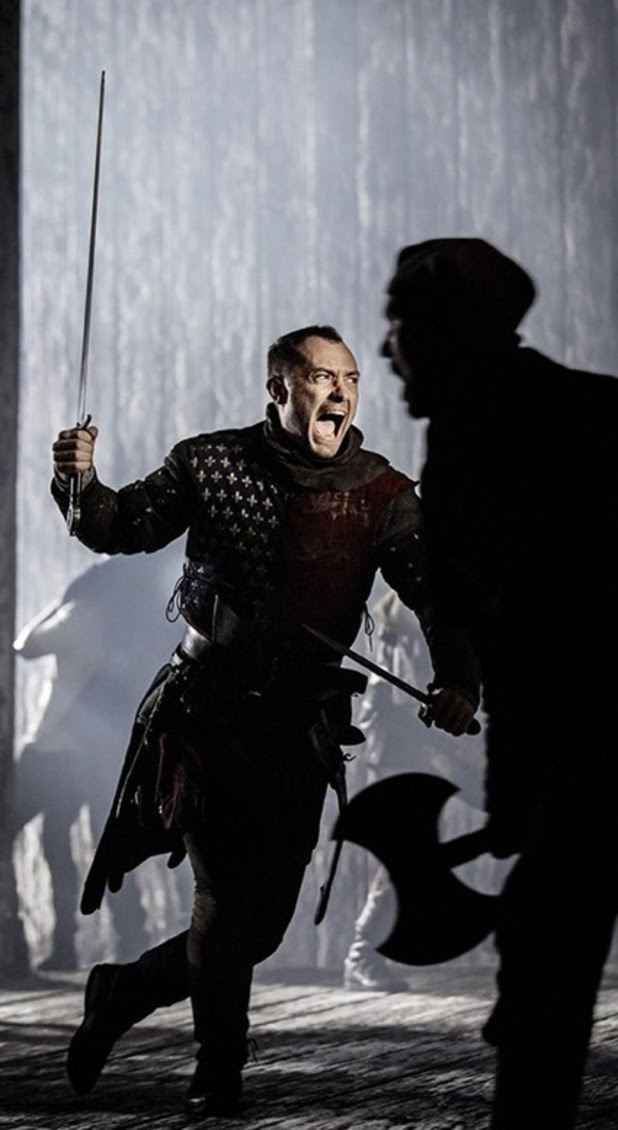 
Whilst the kings played by Tennant and McAvoy embody and play upon aspects of those actors own personalities and physicalities, so Henry plays to the personality of Law. In the closing scenes there is a change of place, and Henry woos Catherine, Princess of France.  It is tender and romantic, and more than a touch Alfie. 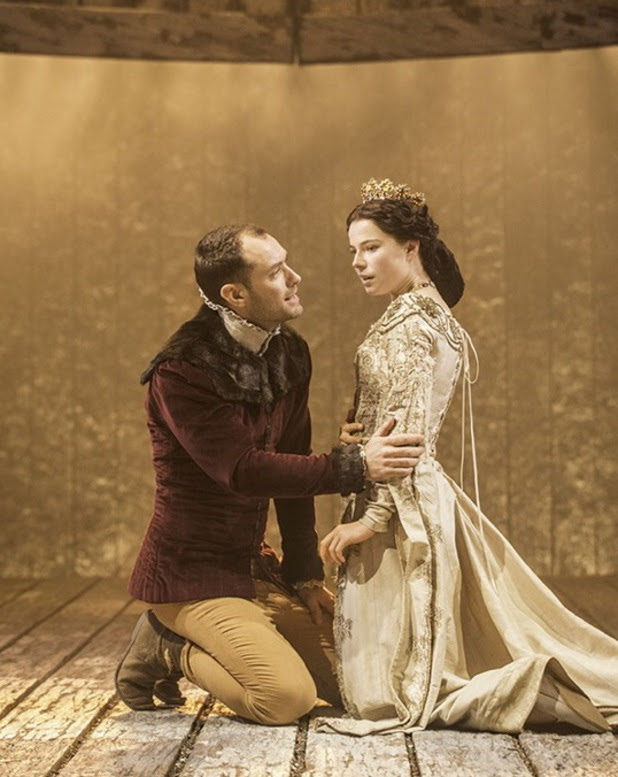 
As the chap in the row behind me so rightly observed, there are very few female characters in this blokey play, and whilst the battle scenes require Henry to be a man's man, here, playing opposite Catherine, we see the softer side of his character.  Even the costume he wears is literally softer, with fur around the collar and cuffs of his doublet, which is now of velvet, not leather, and a warmer claret red colour.

After persuading her for a kiss, the line 'Here comes your father!' is a comic gift.

In all, after a slow start, the play is a delight.  Jude Law is a perfect Henry V, playing him as a King who is a man with a job to do, and who does it without flinching, and with a whole lot of backbone.
Posted by Judith at 10:45