Sculpture on an Industrial Scale

This is a really interesting little BBC film - it's about a mannequin factory in London, and it's both fascinating and a little bit creepy. 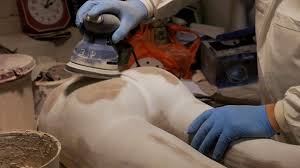 The processes that you see in it, of making clay models, building moulds and casting forms out of fibreglass and papier mache, are pretty much exactly the process that I do at my sculpture class at art school, but on an industrial scale.

I have to say though, I find models in shops rather alarming, and rather too easy to mix up with real people (although I suspect that's just me).  They have a habit of making me jump.  Plus if you've ever seen Eccleston-era Doctor Who, there's always a hint of the Autons...

But where does art and craft end and mere replication begin?  Are the models actually pieces of sculpture?

It would certainly be a fabulous place to take some really interesting photos...  Have a look at these famous Magnum photos HERE.