Whilst in London, I also had the chance to see again this monumental figure group by Henry Moore from the 1950s. 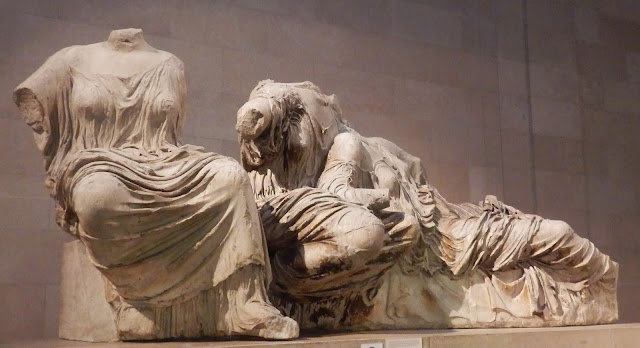 Notice the styalized forms, the reduction of the figures to their pure expressive elements, sensual and fluid treatment of the drapery clinging to the forms, the emphasis on the intertwined relationship between the protaganists....

That's part of the two and a half thousand year old Elgin Marbles from the British Museum, which I visited last week.

This is the Moore. 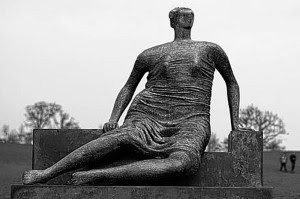 
Moore's working maquetes in plaster have a similar textural quality to the marble of the Greek statues.  These undoubtedly must have been in his mind when he sketched the figures sleeping and lying, draped in thin blankets in the underground stations during the London blitz, which ultimately led to his finished bronze draped figure sculptures.

Thus he put together two lots of observed source material from centuries apart - one classical, one raw, immediate and personal - in order to create new work.

So always keep your eyes open and your mind alert to possibilities no matter where you are.  Something might appear to be unrelated to your working practice, but may in fact lead on to other ideas and combinations of sources which can give you fresh insights and ideas. And ultimately, an artist should always be looking to push their work on, to built on their knowledge, to challenge themselves and to keep their ideas fresh.
Posted by Judith at 04:41