Having been well and truly bitten by the Steven Wilson bug, I was down in London to see Mr W and his Hand.Cannot. Erase. tour at the Hammersmith Odeon, and then at the City Hall in Newcastle (you can read a from the Guardian review of the Newcastle concert here). 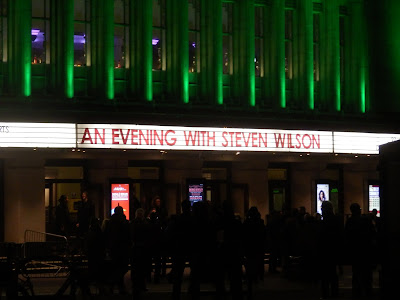 Here's the man himself - he always performs in his bare feet, but you can't quite see that here, unfortunately.  Here he's actually explaining that his songs really are rather depressing. 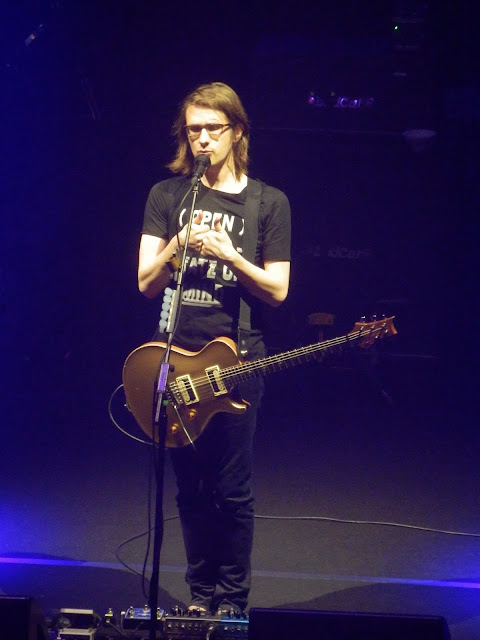 For Hammersmith, I was miles back in the balcony, but it did give a good view of the whole visual aesthetic of the show. (The fact that I was miles back is also my excuse for somewhat shaky photos, although I'm rather proud of the one above.) 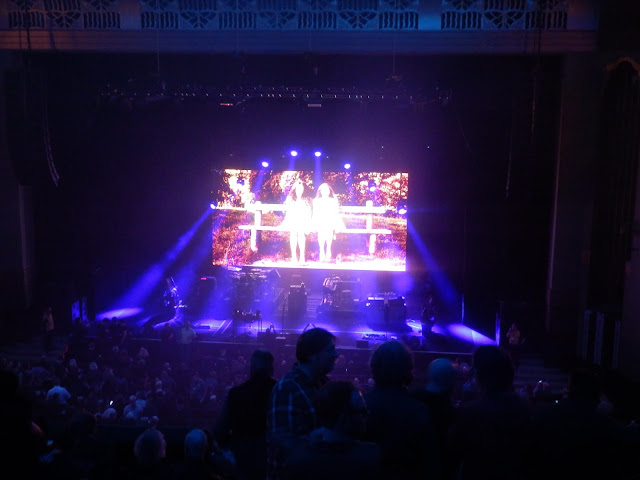 The first half was the whole of Hand.Cannot.Erase., and the visuals at the start of the set, of the female protagonist being drenched in slow-motion water, again reminded me of Bill Viola, especially his piece Martyrs.  This video piece is in St Paul's Cathedral, and I went to see it at Christmas.

Martyrs shows four screens at the end of a nave, in which 4 people silently and stoically endure an ordeal by each of four elements - earth, wind, fire and water. It starts with a man hunkered under a pile of earth, a woman hanging on a rope, a man sitting in a chair, and a young man curled on the ground with a rope round his feet. 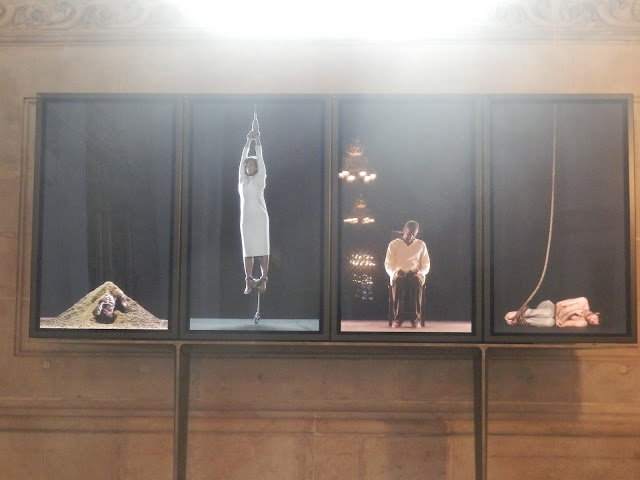 Then the earth begins to flow upwards, releasing the man from the burden of it; the woman begins to be buffeted by the unseen force of the wind; a slow ember, then another, falls around the sitting man and flames begin to take hold; and the young man is gradually hoisted into an upside down position by his feet. 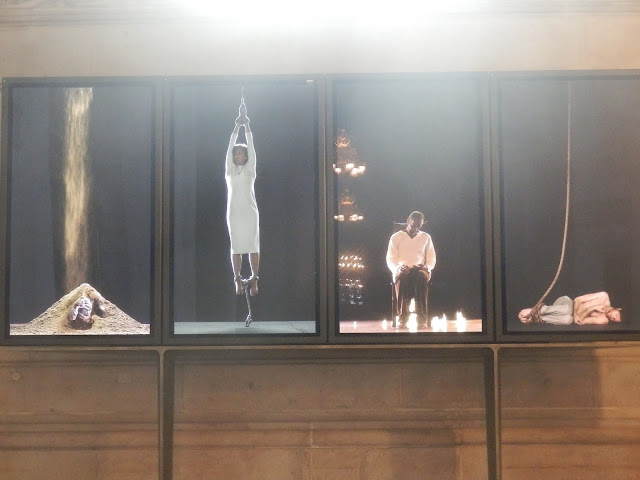 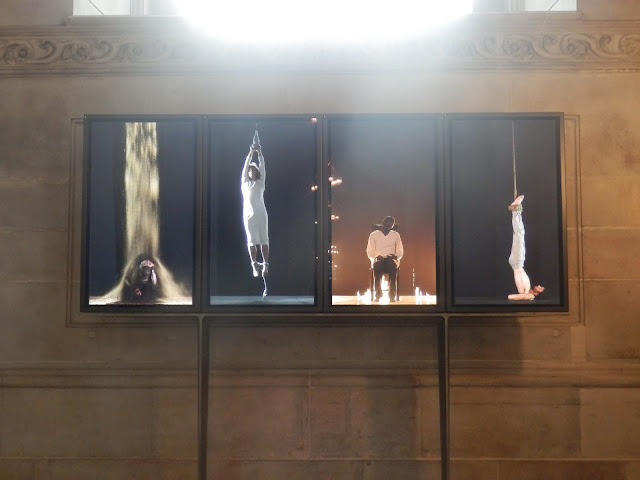 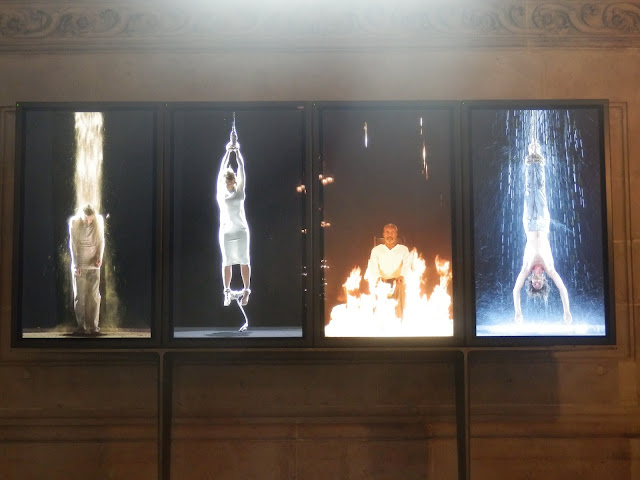 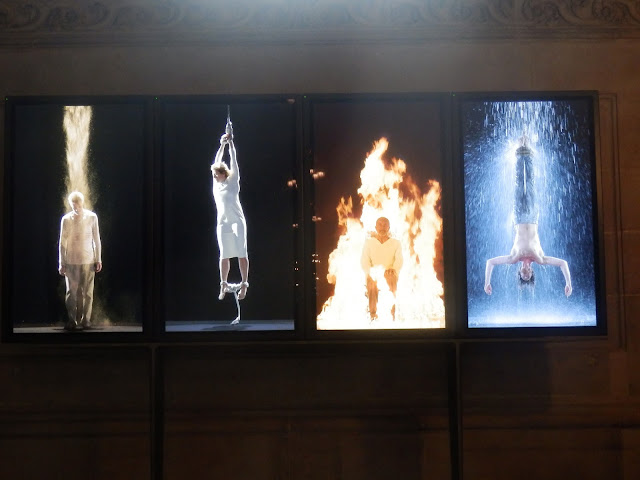 At the end of their ordeals, the martyrs are not consumed by the flames, drowned or otherwise apparently harmed.  Instead, you feel very strongly that they, and you, have somehow been tested through an intense but transformative and redemptive experience, which has not lessened, but in fact trengthened you.

And that, I would suggest, is what happens at a Steven Wilson concert.  The songs have, by his own admission in his address to the audience, profoundly depressing subject matter, about loneliness and death and grief and parting.  Why would you want to go to see and hear that for an evening's entertainment?

It's because it's all strangely catharctic and uplifting.  So the films which Wilson uses as illustrative backdrops for his songs often not only borrow visual leitmotivs from Viola, but also make reference to their emotional sense.

But back to the concert.  Not all the backing visuals were Bill Viola-esque.  This is Lazarus, with nostalgic 1960s family home movies. 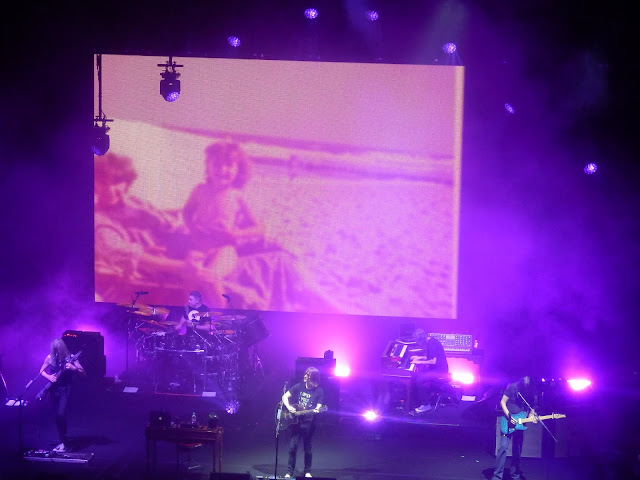 (Nick Beggs is on the left, who also plays bass with Steve Hackett.) 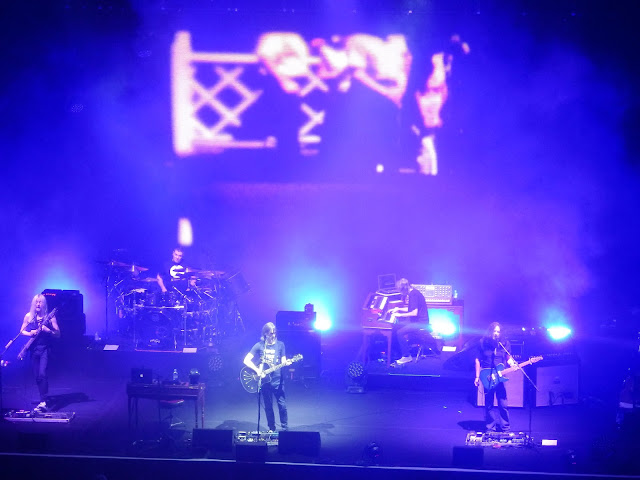 This was really beautiful - Don't Hate Me, with Ninet Tayeb on vocals.  (Ninet blows everyone away with her voice, especially on the heart-rending Routine in the first half.)

The film shows a rainy, out of focus London, where raindrops run down windows, and traffic lights slowly change. 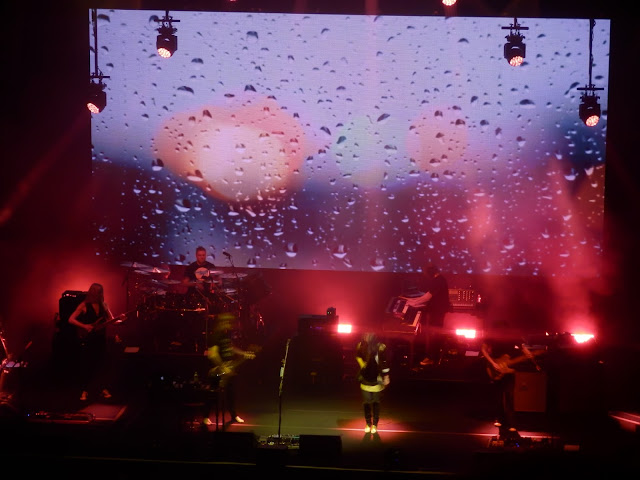 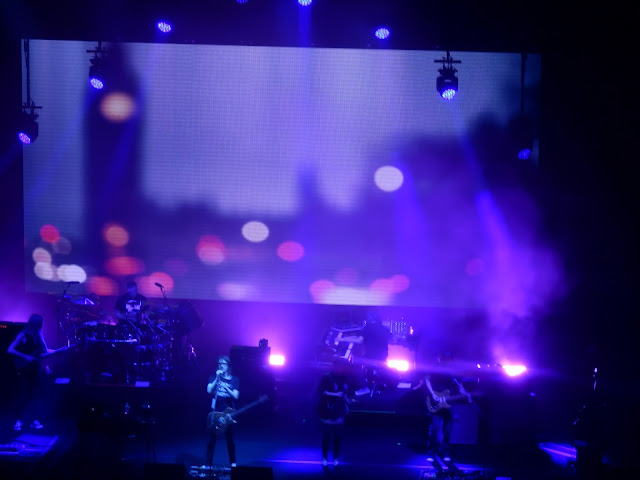 These reminded me of Monet's waterlilies (more of which later). 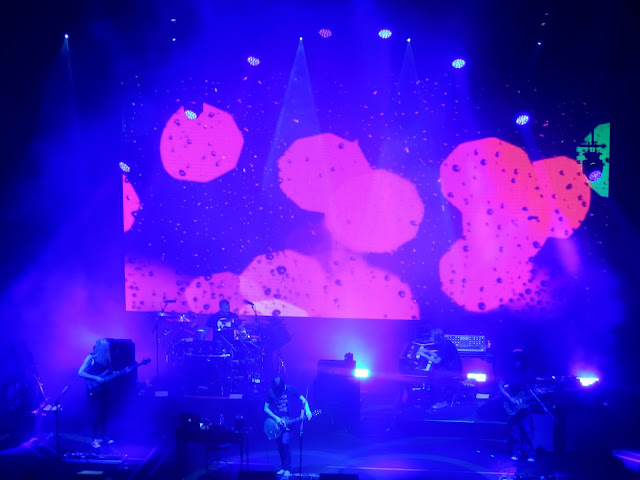 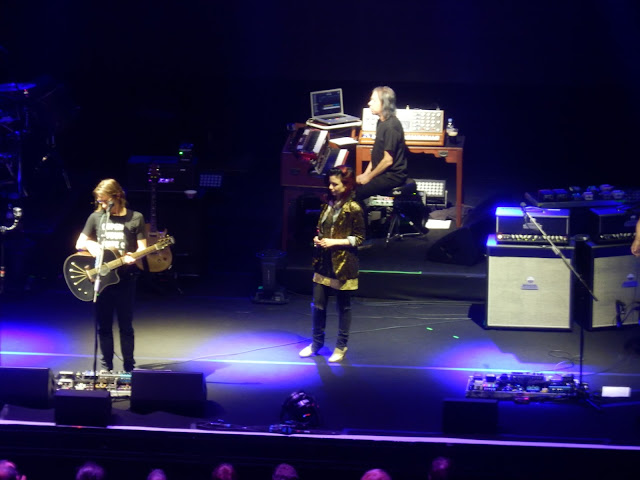 There was also a tribute to David Bowie of a version of 'Space Oddity'. 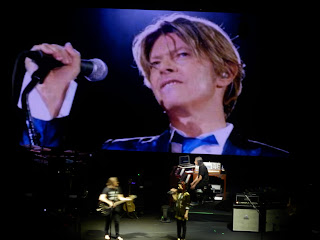 At Newcastle, I was somewhat closer to the stage.  Not always a good thing. 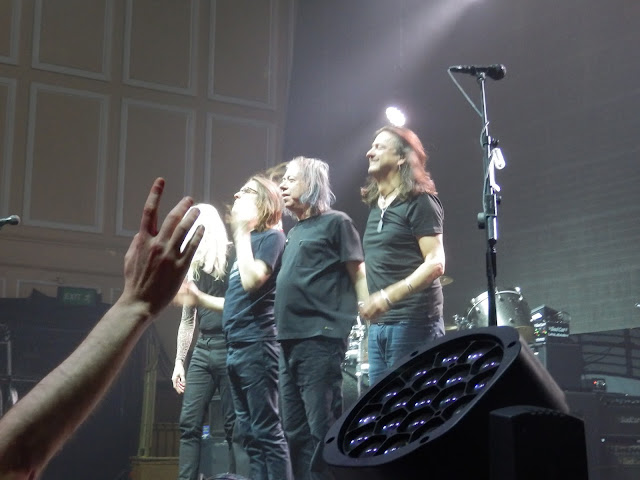 But if you have tears to shed, then prepare to shed them with this, The Raven That Refused to Sing, which was the encore on both nights.  Cry, and be uplifted.

THE RAVEN THAT REFUSED TO SING 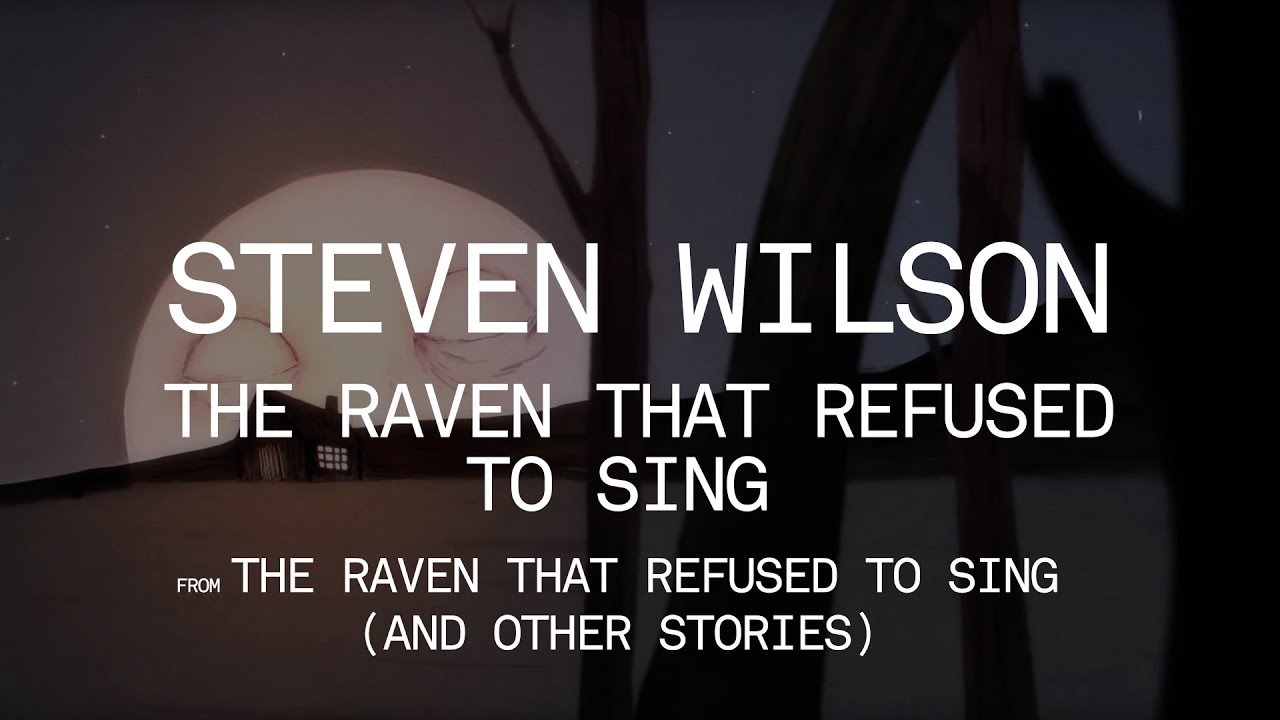