The Culture Show: Richard Wilson's 'Hang on a Minute Lads, I've got a Great Idea'

Yesterday's episode of BBC's The Culture Show featured a new installation by witty urban sculptor Richard Wilson, based on the final scene of the iconic 60s crime caper 'The Italian Job'.  Thus two great passions of mine come together - art and minis.

Called 'Hang on a Minute Lads, I've got a Great Idea' (being the enigmatic final line of the film) it consists of a full-size coach balanced precariously over the edge of the art deco De La Warr Pavilion in Bexhill-on-Sea in Sussex.

Mark Kermode took to the wheel of a Morris Mini Minor (which is actually owned by a real-life Mr Bridger - what are the chances of that?) to whizz round Bexhill and set the scene before interviewing Wilson about his piece. 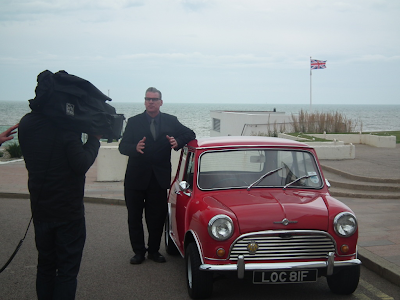 Anyway, Wilson's sculptures are all about confounding expectations, about coming across the unexpected and surprising and beautiful in the everyday.  Take his piece Turning the Place Over.  I saw this in Liverpool in 2008 when it was Capital of Culture.  Walking down the street - perfectly ordinary street, perfectly ordinary buildings - a huge round disc-shaped section of a building suddenly flipped and started to turn over.  You don't quite know what's going on.  Buildings just don't do that.  It's hard to describe, but you can see what I'm talking about here in this Youtube clip.

Richard Wilson,  'Turning the Place Over', 2007. Photograph by Alexandra Wolkowicz

The Bexhill installation is another of those crowds-with-their-cameras-out pieces.

In the Culture Show, Wilson says that he wanted to make 'something of a cliffhanger', to draw attention to an iconic building.  So he chose another icon, a cinematic icon, and put the two together.  Why do something like the Italian Job moment when he could actually just do the moment itself?  "I've played with facades, now I want to play with an edge" he says.

Now, The Italian Job was made in 1969, but was a film made on the post-1966 wave of British patriotism.  If you've never seen the film - and why not?? - it's about crooks going to Italy to steal gold using three plucky red, white and blue minis, and then almost making off in a red white and blue bus.  Except they make a mess of it right at the very end.  The ending is left literally up in the air.  I saw it first at a special cinema viewing with my mini club when I was 6 months pregnant, and I was a very unhappy woman when the credits started rolling.  "Call that an ending??" I remember shouting at the screen.  But I digress.

So now in 2012 we have another wave of patriotic fervour, which we always seem to just slightly muck up, or the weather is terrible, whilst things just kind of teeter on the brink.  Jubilees, Olympics, Wimbledon, economic recession, and just a hint that the UK might possibly be about to break up.

It's all summed up here by a big red white and blue bus wobbling on the edge of an art deco building in Sussex.  It's about national identity.  It's about something small taking on something big (like the minis took on the Mafia). It's about that adrenalin rush of being on the edge of things that makes you feel alive.  It's about about trying really really hard, but being just a bit rubbish and losing magnificently. It's a bit like how Wilson's sculpture is a great idea, but you can actually see the girder holding the bus in place, so it's actually just slightly not as great as it could be. 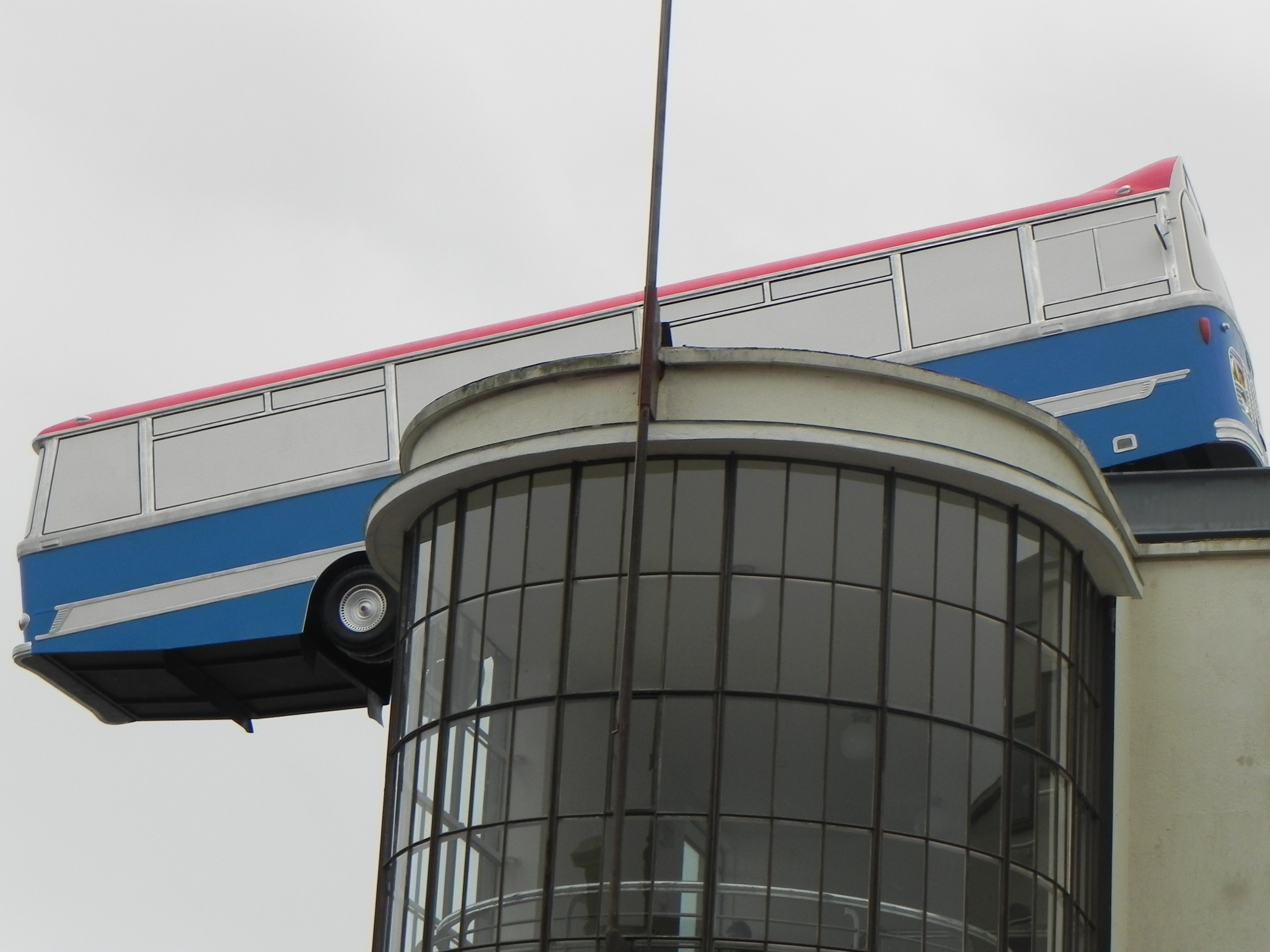 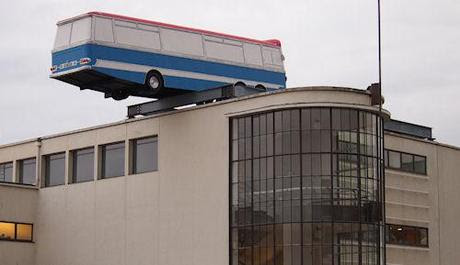 I've never actually been to Bexhill-on-Sea.  I've seen it often, from a distance (my family are from Eastbourne).  I've even painted it (from the pier at Eastbourne).

But I've never actually been there.  I'd really like to though.

Read about the exhibition on the De La Warr Pavilion website.
See the episode of The Culture Show here.


You can see Richard Wilson's installation (which, incidently, is sponsored by Bexhill boy Eddie Izzard) until 1st October.

PS And if you want to solve the problem of how to get the gold without tipping the coach off the edge of the cliff - here's the answer....

The Independent/John Godwin
Posted by Judith at 14:13