I was at Chatsworth House in Derbyshire at the weekend, and in amongst all the grandeur, I came across this great painting by Salvator Rosa.   It's called Landscape with Jacob's Dream.

It's funny when you walk round the corner in somewhere like an old stately home, and you unexpectedly come across a Rosa - it's like meeting the black sheep at a family get-together.

It's a big painting, with Rosa's rugged romantic landscape of rocks and trees taking up the right two thirds and the rather colourful psychadelic dream of Jacob taking up the left hand third.  What hits you is the unusual (for Rosa) punch of three pops of primary colour - red yellow and blue - of the bottom three figures.  That bright, advancing red garment of Jacob, the subject of the painting, is right down there jumping out of the bottom left, and keeps drawing your eye.

There's a discarded wine flagon at the side of the rather abandoned-looking Jacob, which might suggest the origin of the colourful dream - Rosa's good on the nice little quirky details. (His Humana Fragilitas in the Fitzwilliam in Cambridge has a little pile of owl pellets in front of the rather queasy looking owl in the bottom right if you look closely.)

The landscape echoes the turmoil of the dream, as the trees strain towards the angels as they ascend and descend the ladder to heaven, in a great swirling, agitated circular composition.

It's a big, mature painting, made when the artist was 50.  Here it is in situ at Chatsworth... 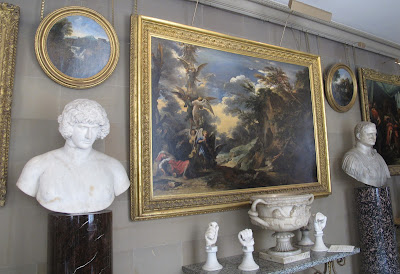 
..and here's Jacob in all his loosely painted glory.  Apologies for the camera work (the lighting was really bad with lots of reflection), but take a look at the way those rocks are painted.  There's lots of lovely, loose impressionistic brushwork.  I've blogged before about Rosa here, and how he was out in the great outdoors painting en plein air over 200 years before the Impressionists.  You can really see that in a passage of paint such as this. 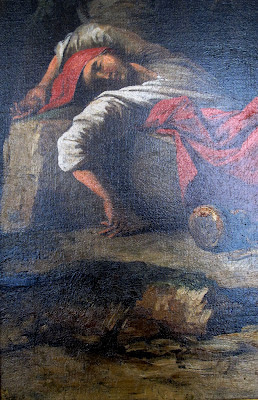 Here's another detail, of the trees on the right hand side.  Again, apologies for the reflections, but they do allow you to see that the leaves  of the tree are painted with raised impasto.  See that area of white where the light is reflecting off the varnish in the bottom right?  You can see dark shapes in the middle of it.  This is the raised paint of the leaves on the branch of the tree coming down from the top right.  The paint is rough and stippled to give the texture of the foliage. 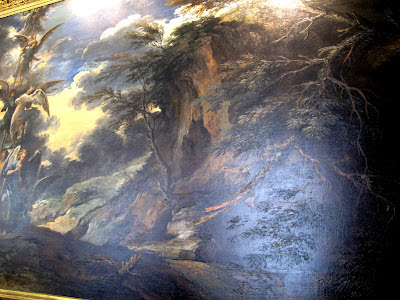 So instead of the paint surface being smooth and flat so that you can't see the brushmarks, you can very much see the way that the painting is put together - that's a very modern idea.  It's saying that the hand of the maker is allowed to be seen, and the personality of the painter is incorporated as part of the illusion of the painting, rather than being subsumed by it.

You may not have heard of Rosa today, but he used to be wildly popular, both in his own time and later for the Romantics, for whom he embodied thrillingly wild landscapes peopled with excitingly rugged bad boys.

Rosa was a bit of a rugged bad boy himself.  Here he is...


Yes, Rosa may not be a name on everyone's lips these days, but there was a show of his work at Dulwich Picture Gallery in London in September 2010, the first major UK show since 1973 (the tercentenary of his death).   This self-portrait was sold at Christie's in London in 2010, just before the Dulwich show opened.

Christie's described it as having 'unfettered strokes and free handling typical of Rosa's graphic work, with brown pigments over a ground layer left partly visible (with) the immediacy of the alla napoletana style', with 'rapid execution, constructed of economical, broad brushstrokes'.

No wonder - take a look at that face.  It's a very intense and compelling image, full of a brooding personality.  It's over 350 years old, but it feels very modern.  It's a manifesto of the self, pertinent today for an age that's all about the self, self-image and self-promotion - something Rosa excelled at.

Maybe this tells us that we're entering a new era of popularity for Salvator Rosa...?

Visit the Chatsworth House website here.  Beautiful house, lovely gardens (very difficult maze to even get into...).  They've also got a small but stunning exhibition of drawings on at the moment, which includes a Rembrandt, a Leonardo and a Titian.
Posted by Judith at 17:02