It's Official - It's the Olympics!

I'm just back from the London 2012 Olympics.  Not that it starts until tomorrow (officially), and not that I was in London.  Because today I was two miles down the road at Hampden to watch the footie.

Surprisingly, given that at one point I thought that I was going to be the only person in Scotland who'd actually paid for an Olympic football ticket, there was a crowd of nearly 38,000, consisting largely of families.  The large numbers obviously took the organisers by surprise as well, as they ran out of Official Pies.

Security to enter the venue was bizarre.  The list of items that you're not allowed to take in is long and complicated - no bags, no drinks, no food, no items that are unofficially sponsored (so don't go in a Pepsi T-shirt), and no sharp items or liquids over 100ml.  So tough luck to the group of Japanese supporters who arrived pulling their luggage, obviously straight off the plane.

So outside the ground you are given a very, very large clear plastic bag (obviously they're expecting you to try to smuggle in your pet elephant), and asked to deposit metal items (but not cameras), wallets, keys, and a variety of other random stuff like plastic pens from the depths of your handbag.  You then carry the plastic bag literally three yards, go through the gate and then promptly take all the stuff out of the bag and put it back in your handbag.  There's no actual metal detectors or screening, or people looking at the bags.  Baffling.

The Olympic football teams have an age limit on them, so the teams playing today were Honduras Under-18s v Morocco Pre-Teens, and Spain Toddlers v Japan Tweenies.

Honduras and Morocco drew 2-2, while Spain were the definite favourites to win their game.

However the Japan Tweenies (who bowed politely to the crowd before the start), showed plucky determination, and by the end were breaking away and firing at the goal with spirited determination, if not accuracy.  Warming to the underdogs, and the fact that lack-lustre Spain had obviously thought that the game was in the bag, the crowd began to roar on Japan.

The Spaniards, down to 10 men and suddenly realising that it was all slipping away, began to act in a ridiculously petulant manner, punching opponents and tugging shirts, earning boos from the good-natured crowd. 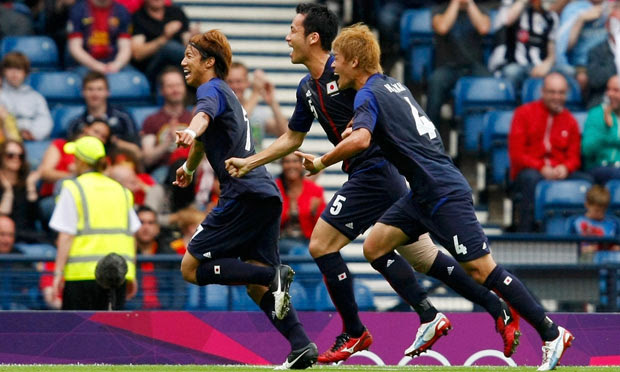 And so the Japan Tweenies won a historic 1-0 victory, and went home to a well-deserved rusk and a hot bath.
Posted by Judith at 11:45