Jenny Saville and the Dynamics of the Art World

Waldemar Januszczak wrote a review of Jenny Saville's retrospective in Oxford in yesterday's Sunday Times, which he seems to have generally liked.

However, one of the points that he makes is that her work has largely been off the art radar in the last couple of decades.  In my previous posting here I mentioned that she doesn't get a look-in in a big new show on women artists at her Alma Mater, Glasgow School of Art, and that the Oxford show is her first solo show in the UK.  And yet she's a big name.  How does that add up?

Well, it's all down to, as Januszczak puts it, 'the dynamics of the art world'.  Saville was discovered by Charles Saatchi in the 1990s, then represented by the Gagosian Gallery, and thus became a valuable commodity and a brand to invest in.  Her paintings were snapped up and squirrelled away from public gaze by rich collectors.  So she paints away, and has done for a couple of decades, but only for those with the cash.  It's a strangely invisible career.

I also talked recently about Art No-one Can See.  What's the point of making art only to deliberately hide it?  However, whereas the statues that are dropped to the bottom of the ocean are intended to be hidden, Saville's art is not created with that intention.  But early success seems to have had the same effect, of hiding her work and creativity away, although her art has been seen by a small elite audience rather than no audience at all (until now).

Which is a shame for someone who is a fine draughtsman and has a feminist message.  Here she is with her writhing babies.

It takes a woman to draw babies that don't keep still, and of course the drawing makes reference to every male-painted Madonna and Child that's ever been created. However, by putting herself centre stage and referencing art history, she does of course set herself up as the figure of the Mother of Christ, which is quite a big statement to make.

Also, there's a certain lack of engagement there.  Yes, children are all wriggly - but it's all observation (and I'm not sure what her son is going to think about that image when he's 14...), lacking in warmth.  The children come across as just unwilling models.  In fact, there's something quite threatening about the restraining hand around the oldest child's throat, and the feeling is that the composition is about to burst apart.

To show you what I mean, here's Caravaggio's take on a similar theme. 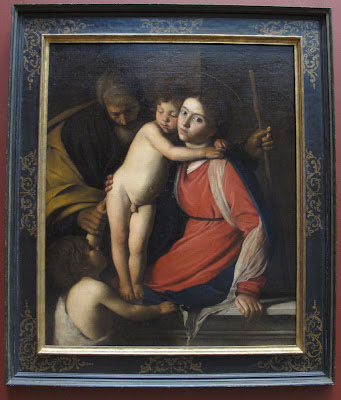 It's observation, with lots of beautiful little details, such as the dirty fingernails of Mary's working hands... 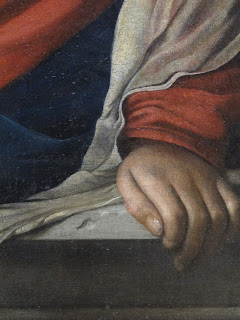 But it also observes the inner as well as the outer, by showing, with a small gesture,  the naughtiness of a never-still child that has to be restrained by the long-suffering Joseph... 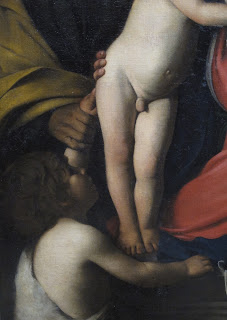 ..as well as the tenderness between child and mother, through this small detail of hands, where Christ is fidgeting with his fingers behind his mother's neck... 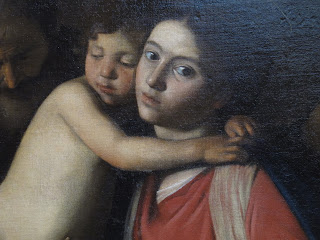 The circularity of the composition also suggests a whirling movement, that everyone has just about managed to stay still enough and out of trouble enough for one second for the artist to record the scene, because family life is always in constant motion, but always bonded together (although, being Caravaggio, you'll notice that there is a dark centre at the heart of the painting).

As for the title of Jenny Saville's drawing, 'Pentimenti' (the word means where you can see that an artist has changed their mind in a painting or drawing by altering, say,  a line or a figure), it's obviously referring to the numerous lines trying to draw the continually-moving children.  However, it inevitably also plays upon the idea of a change of mind about the whole motherhood thing.  After all, the combination of motherhood/artist is a perpetually thorny one.  It takes you out of the art market and reduces your worth.

But, muses the Financial Times (with no sense of irony) does all this having-it-easy patronage remove the emotional heart of the work?  They found, despite the scale of the paintings, that there was no sense of conflict or struggle (despite Saville's interest in the really big themes of life and death, gender and identity), and that it was all just a bit too unchallenging.  Meat without the meatiness.  Hoorah for women painting women, and not making them look like Renoir's sugar-coated Play-doh girls, but is her work all just mere observation?  Unless there's the emotion, getting underneath all those mountains of flesh and wriggling limbs, you don't feel the connection.

Do artists, then, need to starve in a garret to produce really exciting and emotionally genuine work?  Or once you expose them to the safe waters of financial success, do you dilute the very thing that made them desirable in the first place?

Jenny Saville's show is on until September 16th at Modern Art Oxford and the Ashmolean Museum.  See it and decide for yourself.