I caught a really interesting programme on television last night, 'imagine...Dancing with Titian'.  I'm not a great fan of dance, and thought I wouldn't like it, but it was really enthralling.

The programme, with Alan Yentob, documented new artworks and dances inspired by three Titian paintings gathered together at the National Gallery in London for the first time since the 1700s.  The paintings show scenes from Ovid's Metamorphoses based on the myth of Diana.  They are... 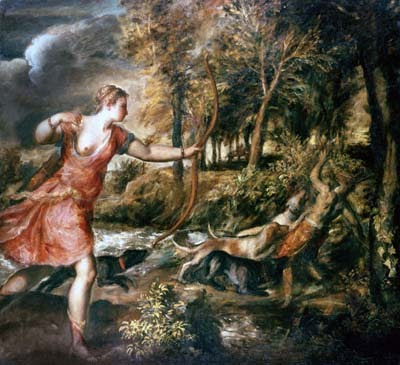 Titian, Diana and Callisto (Oil on canvas, 1559) (from the National Galleries of Scotland)

These are mysterious, sensual paintings, full of texture and layers of glazes and flickering licks of glowing paint.  The paint is applied in various ways, sometimes smudges, or brushed, or dabbed, or looking as if fingers have been used.  It must have seemed radically experimental at the time.

This is echoed by the present day artists in the rest of the National's exhibition.  ‘Metamorphosis: Titian 2012’ features new work by contemporary artists Chris Ofili, Conrad Shawcross and Mark Wallinger in a unique collaboration with The Royal Ballet.

It was the Royal Ballet work that was perhaps the most interesting.  There were three ballets; one inolved a huge industrial robot which represented Diana, and moved on stage in a presence that was both beautiful and menacing, creating a real tension between the human and the mechanical.  And because of the problems that they had with the technology, you literally didn't know what was going to happen, so there was a continual frisson of danger.

The second ballet had giant mirrors, which reflected not only the dancers but the audience as well, playing with the ideas of voyeurism contained in the Diana story.

But the last was perhaps visually the most striking, even though it was the simplest, telling the story of the death of Acteon, set upon and killed by the hounds of Diana.  The sets and costumes were designed by Chris Ofili, who is not, I have to say, my favourite artist.  However, here he played an absolute blinder.

The sets were stunning, with a mysterious forest, like the other-wordliness of the magical forests in Shakespeare, and lit by a huge scarlet red moon.  The fluid costumes and details of the individually designed dogs heads reminded me of the costumes for Parade designed by Picasso in 1917 for the Ballet Russes (which I saw performed some years ago in Edinburgh as part of the Festival).  It was amazing watching the whole creative process, and all the parts coming together.

You can watch extracts of the ballets here. 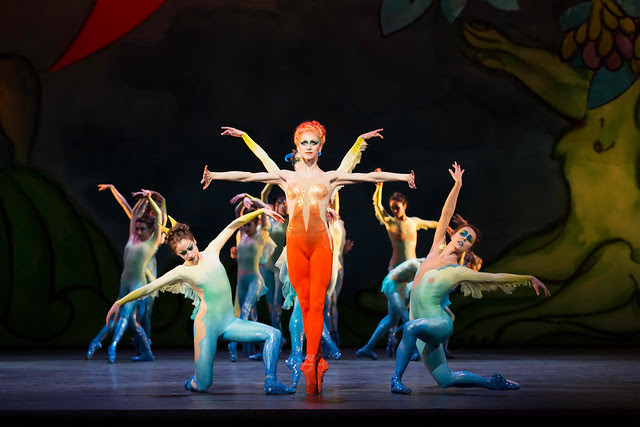 Not all of the connections with the Titian paintings were immediately apparent, but the it was more about the sense of the paintings, the contrasts of sensuality and cruelty, the transformative process.  Chris Ofili's set designs and costumes certainly were the most successful in combining dance with the painterly sense of the Titians.

When Titian painted these Diana pictures in his 80s, at a time in history when life could be cut brutally short at any moment, he must always have felt 'Time's winged chariot hurrying near'.  The fact that Titian's own death and transformation from the mortal was on his mind has greatly informed the work.  This is especially apparent when you look at the paint surface closely, with its wispy, flickery, urgent insubstantial layers of substance conjuring up form, and is possibly most demonstrable in one of his last paintings, the grim Flaying of Marsyas.

Again from Ovid (read more about it here), it is a truly shocking image, telling the story of the chirpy satyr Marsyas, whose only crime was to play the pipes better than Apollo.  For this, he is flayed alive.

Again, the paint is flickery and urgent, but spares none of the detail of the horrific scene.  Upside-down, the grimace of the martyred Marsyas looks like a smile.  It looks like Titian is also expressing all the pain and humiliation and injustice of old age itself, with youth and innocence and happiness being pointlessly stripped away until nothing is left.  It's about the pain of being mortal and having a body, and of losing it.  A metamorphosis indeed.

Do have a look at the programme if you can - it's a treat - and the free exhibition is on until 23 September at The National Gallery in London.

See the programme on i-Player here.
Posted by Judith at 05:10