Art, Disability, and the Dignity of Risk

I'm sure you'll have seen Oscar Pistorius, the 'Blade Runer',  racing at the Olympics.


Pistorius had his legs amputated as a baby, so fitting his prosthetic legs was as normal for him as putting on a pair of shoes.  His disability wasn't made an issue of by his parents.  With this mind-set, he never saw a problem about pursuing his natural athletic ability, and the sight of him running in the semi-final was both compelling and beautiful, with his sculptural, tip-toe form tearing down the track.

His biggest problem in getting to that stage at the Olympics was with the governing body of the IOC, who complained that his prosthetic legs gave him an advantage.  Obviously none of the IOC members had had their legs amputated, and had then attempted to run a race out of starting blocks balanced on pieces of narrow bent metal.  It's hardly an advantage.  However, eventually he was allowed to take part alongside everyone else.

In fact he came last (not his fault in the relay), and in fact, instead of suspicion and complaints from fellow competitors, he won the utmost admiration and respect.  The winner, Kirani James of Grenada, didn’t rejoice in his own victory in the immediate aftermath but made straight for Pistorius, unpinning his racing number from the front of his vest and swapping it with him. It was a great moment. 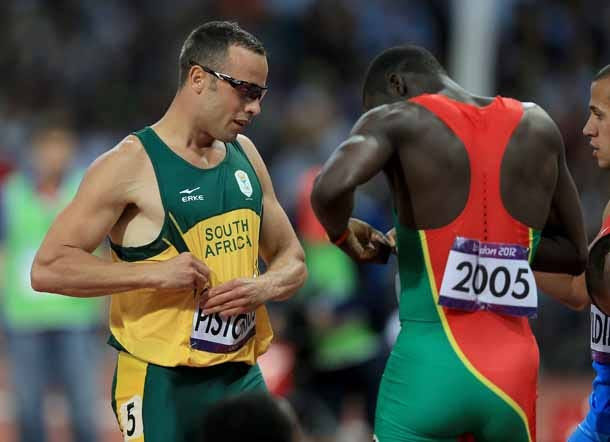 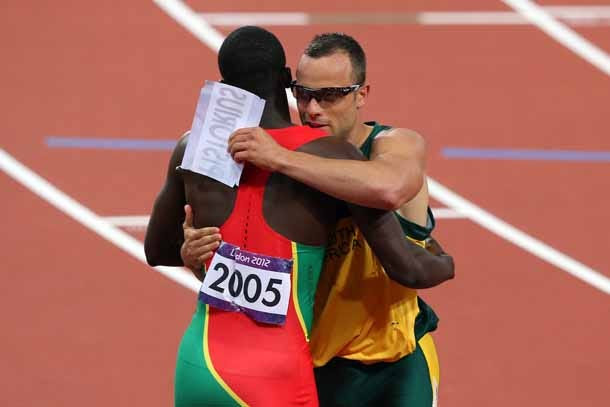 Pistorius was making the point that he didn't want to make a point.  He was saying, "I want to take part just the same as everyone else - because I can run."  He wanted to be allowed to be equal, without concessions - the dignity of risk.

Read more in an article here.

Australian Priscilla Sutton is also an amputee.  For her, a prosthetic limb is also something normal, not something to hide or disguise, but a piece of body art. 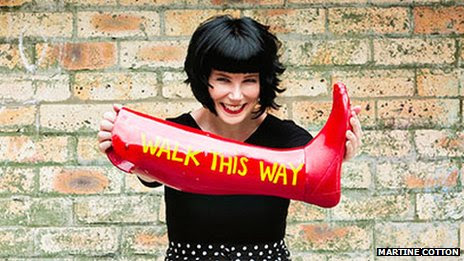 She has curated a show 'Spare Parts' which opens next week in funky Brick Lane, London, where artists have been asked to decorate and transform prosthetic body parts.

It came about when Priscilla found one of her old prosthetic legs in a cupboard, and found that she didn't know what to do with it - it's a hard thing to dispose of, and is something that is very personal and intimate.  The problem of what to do with it turned into the idea of something celebratory, and so the exhibition took shape.

An art exhibition about fake body parts might not be everyone's cup of tea.  It's a bit 'edgy'.  A false leg can be something frightening or squeamish, and a prosthesis an object of apology or shame. You don't know, as a non-wearer, whether to look at it or not.

But for the wearer, they can be transformed to become an extension of the self.  The exhibition is about taking something sculptural and personal, something normally hidden or disguised, and making them beautiful, something of acknowledgement and acceptance. 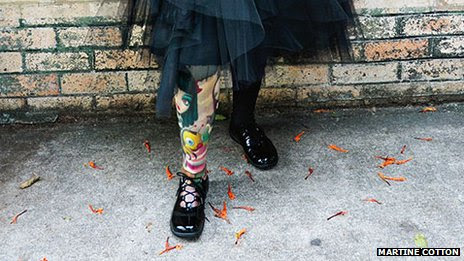 Now, that's a party leg!  It's not hidden.  It's not trying to be the same as the other leg.  It's saying exactly what it is, but in a way that makes it a real part of the owner.

Oscar Pistorius's legs say - you know what, I'm fast.  I can run.  I'm able. I'm about speed and fitness.   Priscilla's leg speaks of her personality and youth, vibrancy and tenacity.

Both people have had bad stuff happen to them - well, ok, but that's not the issue any more.  Now it's about what they can do, not what they can't.  Their disablities have thus become conduits for their creative energies and talent.  It's ok to look.

Spare Parts will be at The Rag Factory, Brick Lane, in London from 25 August to 9 September 2012.

Read more about the exhibition in the article here.