August on the Causeway Coast

I'm just back from my annual trip to the Causeway Coast in County Antrim, Northern Ireland (weather - variable) where I'm pleased to report that I did in fact visit the new visitor's centre at the Giant's Causeway.

As parking can be an issue, I took the opportunity to book my timed ticket online at the National Trust website, where it costs £7.50 instead of the usual £8.50 (gone are the days of it costing £5 per car, no matter how many people were in the car - and we thought THAT was extortionate!!).

However, there were a few problems.  Firstly, once I'd successfully completed the transaction online, I waited for my ticket to be emailed.  Nothing happened.  I printed off the final screen with the barcode and reference number, and good thing I did.  When the e-ticket still hadn't arrived the next day, I contacted the National Trust only to be told that they 'couldn't resend the ticket'.....

Anyway, I rolled up on Friday at the appointed time, but the ticket doesn't guarantee a parking place.  So if you pay for a ticket and there's no spaces left, then you have to go back to Bushmills, park the car there (if there's space) and get back to the Causeway on a park and ride shuttle bus.  By which time you may have missed your ticket time-slot.

However, there I was bright and early in a near-empty visitor's centre, which I have to say was a very pleasant surprise.  With its grassy roof, it isn't nearly as intrusive as you'd think. 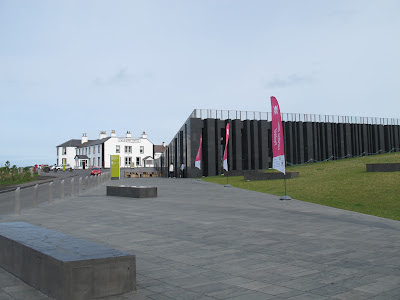 Inside, there's a big open-plan cafe, gift shop, 'experience' space with some quite nice displays, especially the one which is a model of the coastline. 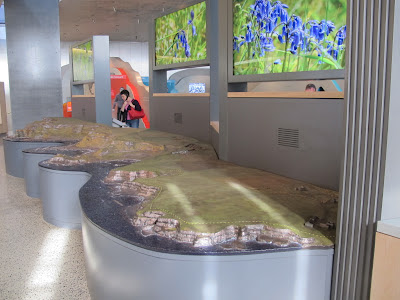 The ticket price includes a rather loud hand-held audio guide, which everyone then wanders about with, so you hear this endless stream of other peoples audio guides.  It's very myth-centric, and goes on heavily about Finn the giant (to the alarm of small children) and his camel.  Just to clarify, that's not a real camel - it's one of the rocks... 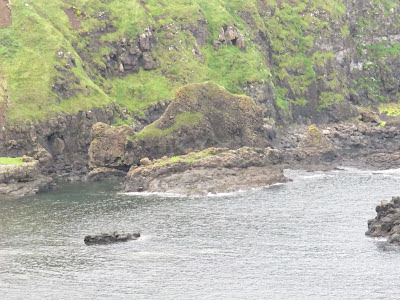 There's also a number of new walking trails, so the geocache which was unearthed by treasure seekers as I sat on the cliff-path last year is now no longer there.  Judging by the plants as I walked around, it's obviously been a hard summer in Northern Ireland, as it has been in Scotland.

Another new innovation at the Causeway is the installation of an artwork, 'FLAGS' by Hans Peter Kuhn.

This consists of 140 boards on poles planted in the hillside, which are red on one side and yellow on the other, and can swivel round in the wind.   Part of the London 2012 Festival, it cost £150,000 to install.

Apparently the flags "generate a strange form of binary code transmitting nature’s message," and "different thoughts and feelings will be evoked depending on how the flags are sitting, light levels and weather". 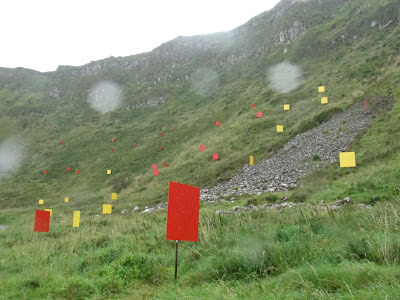 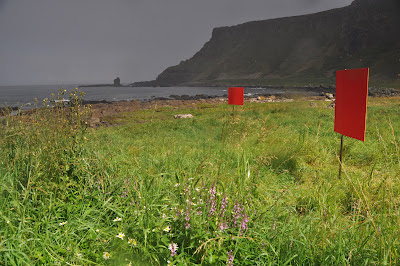 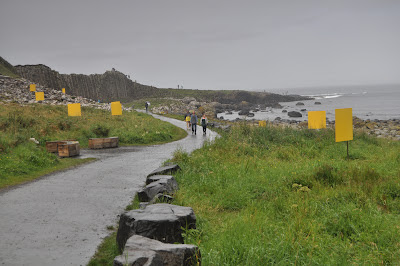 I have to say, I've only been able to find negative comments about the flags by those who who have visited the Causeway - people find that they either look like like warning markers or are just eyesores, interfering with the natural beauty.

My reaction was "I've travelled all this way to take photos of the Giant's Causeway for my own artwork - and there's a bunch of stuff right in the way that's been put there by some other artist.  I can get 'nature's message' without a whole load of big red and yellow flags flapping about, thank you!"

It's a very male thing, to plant a flag on a mountain, marking your territory, and it just annoyed and upset me.  It was really distracting, not enhancing.  It spoilt the Causeway, and made it in to a landscape of ego, as it even seemed to claim all the negative space in between the flags.  It must be like climbing Everest, only to find it's actually all covered in litter.

After a day getting thoroughly soaked, it was nice to go to the cafe, where I must sing the praises of the food.  I'd happily marry the lemon and blackcurant cake and have its babies. 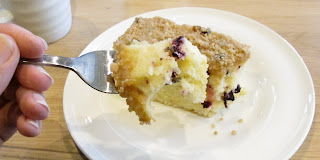 So that's the new improved Giant's Causeway.  Although I have to admit, as nice as the new centre is, I'm actually rather nostalgic for the old rough-round-the-edges centre, where everything wasn't so slick and packaged, where you weren't told where to walk, or what to think about the landscape...