Whilst I was on my photo-taking trip round the south coast of England, I paid a visit to Charleston Farmhouse in Sussex with my cousin.  I've visited it before, but I was dying to see it again as it's so inspirational.

Charleston Farmhouse was, from World War 1 onwards, the home and country meeting place for the writers, painters and intellectuals who made up the Bloomsbury Group, including Vanessa Bell and Scots-born Duncan Grant (he of the Omega workshop). There was quite a lot of goings-on, artistic, intellectual and otherwise.

and here's Duncan, who was apparently absolutely irrisistable to all and sundry.

Now...it was a lively household, with many guests coming and going who were big names in the literary and artistic circles of the time, such as E M Forster and Roger Fry (with whom Vanessa had a relationship in 1911).

Vanessa Bell was married to Clive Bell.  Duncan Grant was gay, with a series of partners/models, including his cousin Lytton Strachey, politician Arthur Hobhouse, economist Maynard Keynes, and David Garnett.

Vanessa had a baby in Christmas 1918, who was born at Charleston and weighed using the kitchen scales.  Upon seeing her there, David Garnett (Grant's lover) declared 'I'm going to marry her!"  In a rather creepy way.

The child, called Angelica, grew up believing Clive Bell was her father, but discovered at 17 that her father was in fact Duncan Grant (much to her distress). 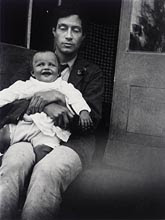 
And yes, Angelica then went on to marry David Garnett.  Blimey!!  Unbelievable.  (And it's actually far, far more complicated than that - for more details read the article here.)

Despite Duncan's homosexuality, he and Vanessa were devoted to each other, and lived together until she died, in 1961, in the upstairs bedroom, looking out at the garden.

(The beds are surprisingly small and narrow....all things considered.)

So the household was a seething mass of love triangles, suicides and Communism.
Although the farmhouse was only rented, the group went to work decorating, embroidering, and printing pretty much every available part of the interior, as well as designing the garden, in a frenzy of creative outpouring.  Plates, furnishings, textiles, ceramics, rugs, lampshades like collanders which cast a sparkly light, - you name it, they made it.   Walls are stencilled.  Fireplaces and doors are painted on.   It's an eclectic, electric whirl of 60 years of creative energy.  Although mentioning electrics, the wiring looks decidedly dodgy (although I was assured it's all been, er, checked...).

Here's the dining room, where Queen Bee Vanessa insisted on being mummy and sitting at the head of the table serving everyone at the strictly-timed evening meal.  She liked to be the alpha female of the group.

I'm sure there were many heated debates between them all.

Can you imagine what on earth it must have been like to be invited there as a houseguest?  You'd have to be on your toes not only to keep up with all the intellectualising, but also just wondering what exactly what was going on between everyone, and was there a lock on your bedroom door.

Here's the drawing room.  It has lovely views into the garden, as if nature is coming into the room.  In fact, a lot of the rooms are double aspect, and have a wonderful feeling of light about them, even though some of them have very dark grey painted walls. 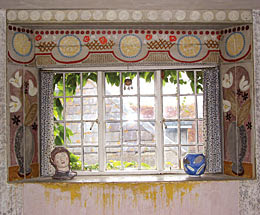 Vanessa painted a lot of murals using circles as a motif.  It's a very feminine symbol, like a full moon, or the circle of life.

This is Duncan Grant's studio.  I have to say, as achingly desirable as it would be to have as a studio, is does have the feel of somewhere to sit and act the part of being an artist, rather than the sense of an active working studio.  It's not exactly Frances Bacon's workplace.

Here's a detail of the lock on one of the doors. 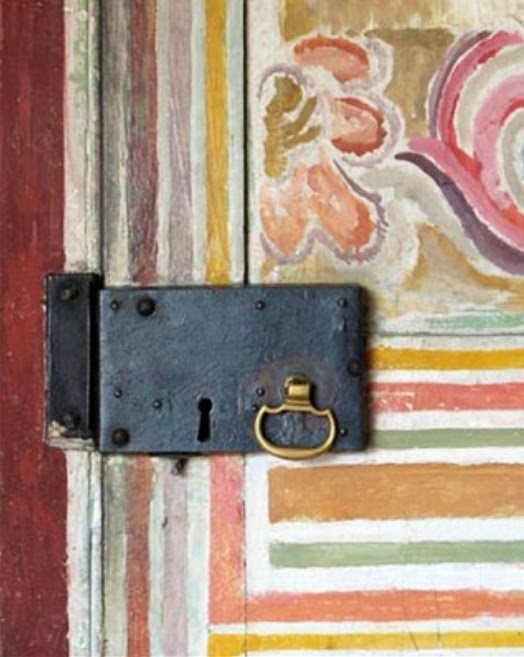 The colours are pastel and chalky, like the soil of east Sussex itself.  The paints were formed from ground pigment mixed with rabbit size glue in order to adhere to the surfaces on which they were applied.

This is the bathroom - even that's decorated.

The general bohemian feel of the household with all its complex intertwined relationship entanglements is probably summed up in this Charleston textile, an embroidered silk hanky.


If you're ever near Eastbourne, then I do urge you to go.  Check opening times first, and be aware that you have to go round in a small group as part of a guided tour.  However, this is wonderful.

The whole place is inspirational, as it just has such a huge sense of energy about it.  It makes you want to go off and paint all over your entire house!!