I'm just back from my annual trip to the Causeway Coast in Northern Ireland.  The weather was very changeable, with rain, sun, fog and mist - so much the same as usual!

As well as meeting up with a lot of people while I was over there, my time was spent travelling about to take photos.  There's many favourite spots that I return to, including the viewpoint above White Park Bay, just along from the Giant's Causeway.  On a clear day you can see Scotland and the islands of Islay and Jura (not on that day, though :-().

When I arrived, I was slightly put out to find that my favourite spot, in front of my favourite clump of grass, had been taken by a large van.

Going round to investigate as to who should have the cheek to park on MY spot, I found another artist, working away. 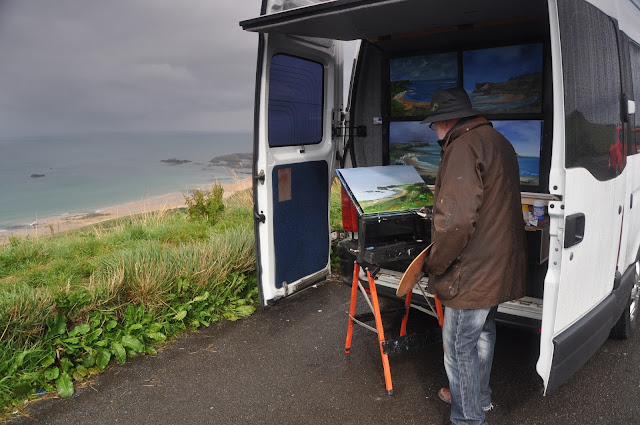 This is Shaun O'Boyle, who lives in the van (which was a green VW until last year) and travels around, painting out of the back of it.  He's very nice, and doesn't mind at all if you stop to chat to him.  He has everything he needs in the camper, including an awning to protect him from the worst of the Irish weather, and works away in acrylic on canvas board using palette knives.  He even took me into his van to show me his old dog, and all the mod cons inside.

Shaun used to be an accountant, but gave it all up to follow his dream of living as an artist.  Like me, his background was one where being an artist was the most ridiculous thing you could possibly have announced you wanted to be, like suggesting a career as a lion tamer or an astronaut.  Artists were something from the realms of fantasy, like unicorns.  But here we all are.

So there Shaun is, out in all weathers, doing exactly what he wants to do .  He's my new Artist Hero.  He makes a living selling his paintings to visitors, who take his work all around the world, so if you're in County Antrim and see him, say hullo to him.  He even has a WEBSITE you can visit.

Anyway, I elbowed Shaun out the way (needs must), and took my photos.

This is the magnificent sweep of White Park Bay (with my favourite bit of foreground). 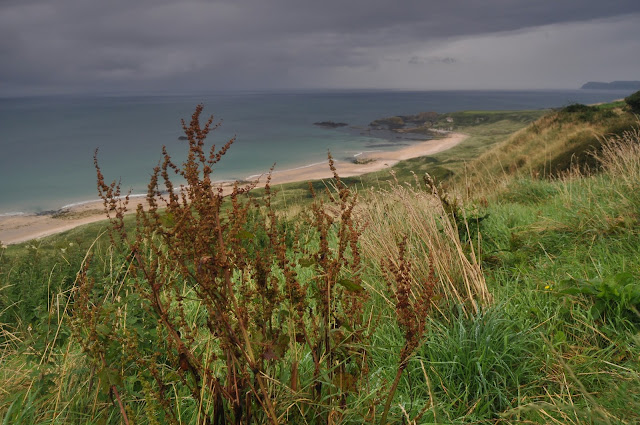