Peter Capaldi - the New Doctor Who

So it's finally been announced - Peter Capaldi is the 12th incarnation of the Doctor.

Which reminds me of a night in June in the early 1990s.

I was at the Glasgow School of Art Degree Show, which in those days, was attended by all and sundry - you didn't need a ticket to get in.  All the arty people in Glasgow, it seemed, turned out and surged through the corridors of the Charles Rennie Mackintosh building in an attempt to take in the work of the latest graduates and hopefully find the latest new big name.  The place was packed.

I was going through a set of the big heavy swing doors in one of the corridors, when who should be coming the other way but the Future Time Lord himself (although I didn't know that then), and ex-Glasgow School of Art student, Peter Capaldi.

As it was a heavy swing door, I politely held it open for him.  He was looking back, talking to his companion, his arm held out in front of him to push the door and not looking where he was going.  Consequently, as he proceeded forward, his outstretched hand came into contact not with the door, but instead took a hold of my left breast.

Which I've always thought an odd thing to say.  Because the doors of Mackintosh's masterpiece don't have any door knobs.  Or door handles.... 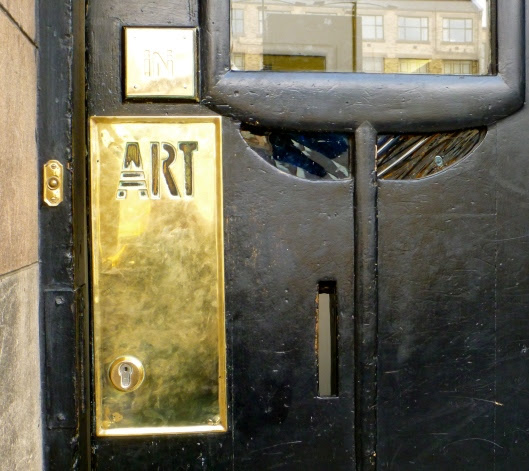 
However, getting back to the subject in hand (so to speak), what will the casting of Capaldi mean for the role of Doctor Who?

The Matt Smith era has been, I would say, somewhat of a disappointment.  After the rebooting of the series in 2004 with and angry, brooding, leather-jacketed Christopher Eccleston ("every planet has a north") as the Ninth Doctor,

and then the iconic casting of David Tennant as the Tenth, 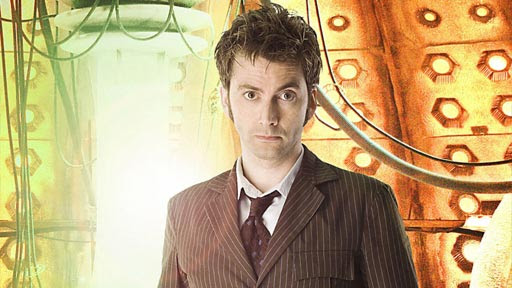 
Matt Smith's youthful Steven-Moffat-era Doctor descended into a morass of labyrinthine
plottage. It's not Smith's fault - he did his best, but ended up with a persona consisting of cut-and-paste wildly-convulsing physical tics as a replacement for insightful character.  Physical semaphore.

The thing is that Who became ALL about the writing, and not about the characters. Plot obfuscating character.

It became Moffat (or Gatiss) going "look, remember that upturned crate with writing on it 3 episodes ago that was onscreen for a split second and you could only see if you paused your television and stood on your head? Well, it was actually a really meaningful clue to the story arc! Or maybe not!! Ha Ha! Wow, we're so clever now we're in charge."

Rather than the episodes being driven by the actions and decisions of believable, fully fleshed-out characters finding themselves in certain situations, you always felt the heavy, self-congratulatory, solopsistic hand of the writer manipulating the action. And that made for dull, clunky, unsatisfying viewing.

Like being satisfyingly drawn into any good drama, watching the adventures of a madman in a box is about the willing suspension of disbelief. But plot lines of such mind-bending convolutedness, where every detail is meaningful, went beyond being challenging and interfered with the basic aforementioned willing suspension of disbelief. You wanted to be drawn into it all and care about it and think, for a while, that it was real. But it became so contrived it was blatently obviously not real, and that strikes at the basic heart of good drama, because you can't connect with it. The hand of the maker had become too obvious.

Which is why people were turning off.  You neither enjoyed the fun of the adventure, nor were gripped by the characters, and therefore weren't scared by the monsters because there was no genuine sense of peril.  You no longer cared.  And my son thought it was boring.  He's a child. He should know.

So now we have Capaldi, a decision that 90% of Whovians are ecstatic about.  (When did that last happen?)

In the 50th anniversary year of the show, Capaldi is seen as a return to 'old values'.  For a start he's not some young whippersnapper - at 55, he's the same age as original Doctor, William Hartnell.  There he is on the left. 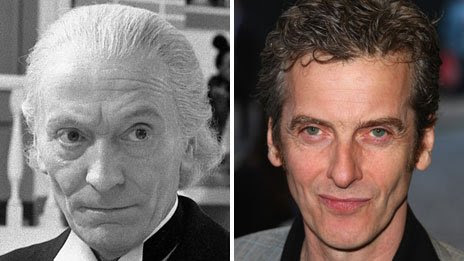 He even made a fan-boy nod to Hartnell when he came on stage at his BBC announcement. 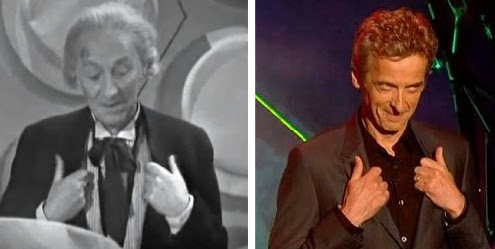 (That's precision thumbage there, honed in the mirror, me-thinks.)

So Capaldi brings a certain frisson of the original grandfatherly gravitas back, whilst not looking like an actual grandfather.  (In fact, he's still not half bad looking...)

Now, he's probably not going to be running around quite as much.  But hey, stories that don't always resort to the line "Run!" and the lazy plot standby of the get-out-of-any-situation sonic screwdriver might not be a bad thing.  It might lead to a bit of practical creativity to get out of situations of peril.  And a return to the driving force of the character at the heart of the action.

Yes!  Character.  And action!!  Not overblown special effects, not overdone plot.  Just stuff you really feel (and please, without Murray Gold's volume-at-11 music telling you exactly how you should be feeling - remember Murray, in space, no-one can hear your score).  Maybe even 'story' rather than 'plot'!*  Now there's a luxury.

If you look at Capaldi's back catalogue, it's got a lot of the Doctor ingredients - the gentle comedy of Local Hero and Soft Top, Hard Shoulder 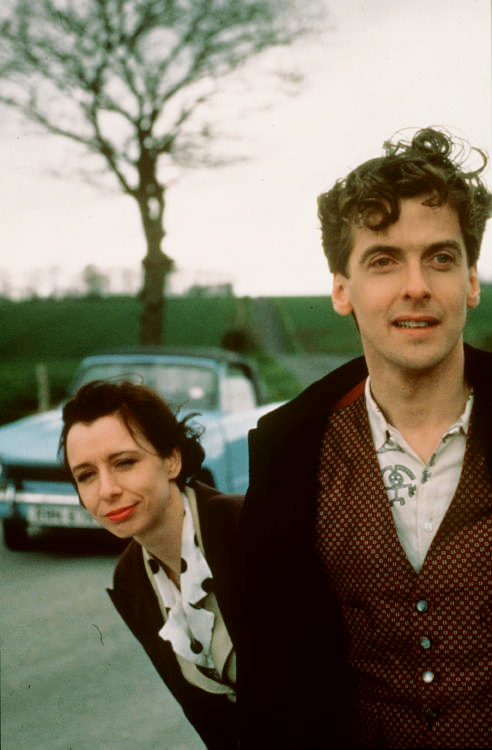 (crikey, he wasn't half bad looking, was he?), the quirkiness of Franz Kafka's It's a Wonderful Life, 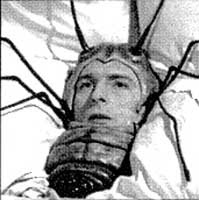 (yes, that's half-man, half-cockroach), and the vein-in-forehead-pulsing pent-up anger (if not the sweariness) of The Thick of It. 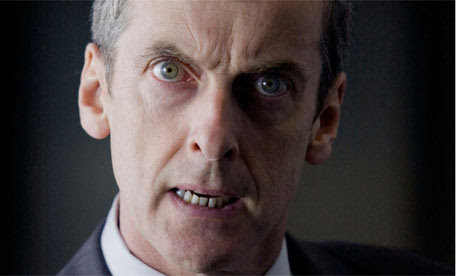 The Doctor has all of those things, plus you've got to believe that he also has the authority, the wit, the intelligence, the darkness, the depth, and the humanity (yes, even though he's an alien) to take on the whole of space and time, plus the inhumanity and the fragility to fail.

The thing that concerns my son is, though - where does that leave the Doctor's companion?

Clara is going to start the Christmas episode (which we might all actually be looking forward to now with genuine excitement for the first time since The Christmas Invasion) with a 20-something Doctor, and end up with an old bloke.  Awks.  If not just plain Ewwww.

Yes, it's going to be a whole new New Doctor.... a Doctor that is, of course, a reflection of the times in which we live, a mirror to ourselves.  Older, sadder, wiser, battered but still resilient, and still rather magnificent.

Let's just hope he plays it with his own Scottish accent.