It was an eventful train journey from Birmingham to Brighton, but we'll gloss over that one.  Suffice to say that the seaside sun was shining and the sea was glistening in Brighton Sur La Mer.  Just enough time to have a nice afternoon tea at the rather stunning Brighton Pavilion, which I hadn't visited since I was a child, and which still retains the ability to take the breath away with its wildly extraordinary gilded, carved, camp, Regency Indo-Chinoisery dragony over-the-toppery.

Unlike the sad concrete bunker that is the Brighton Centre. Oh dear.

It is a venue which piteously and relentlessly sucks the very soul from an audience, and consequently from the performance you have come to watch.  Pro-tip for Front Row Warriors - you can purchase a front row megabucks special VIP package ticket in Row A - and Row A is the front row - but beware, the row extends so far out on either side of the stage that there is a very good chance you will be looking at a large curtain rather than the band. I speak from previous bitter experience.  The front row is miles away from the high stage, and the side tiers are in another post code.  It has all the character of a dungeon.  In fact, I'd prefer to see Yes in a dungeon. That's how bad the Brighton Centre is.  If only the Prince Regent had designed it in 1820.  It would be gold dragons a go-go.

This is from the central block of seats in Row A.  Sheesh! 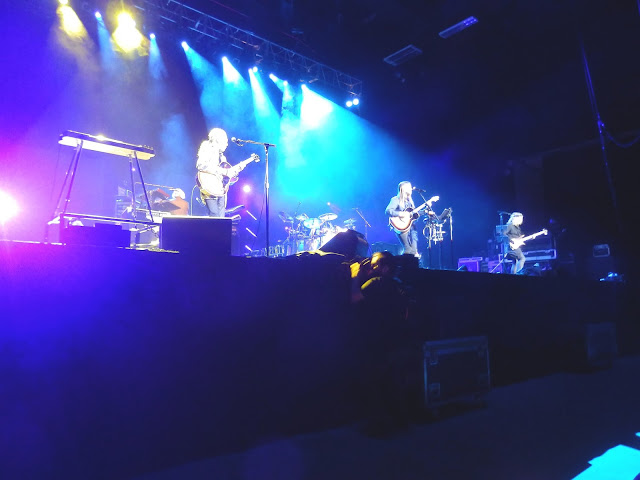 Anyway, I still got some nice photos, I think. 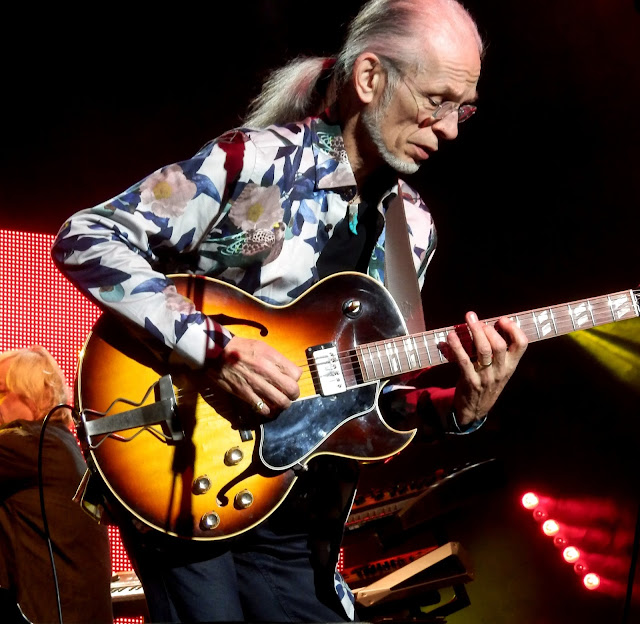 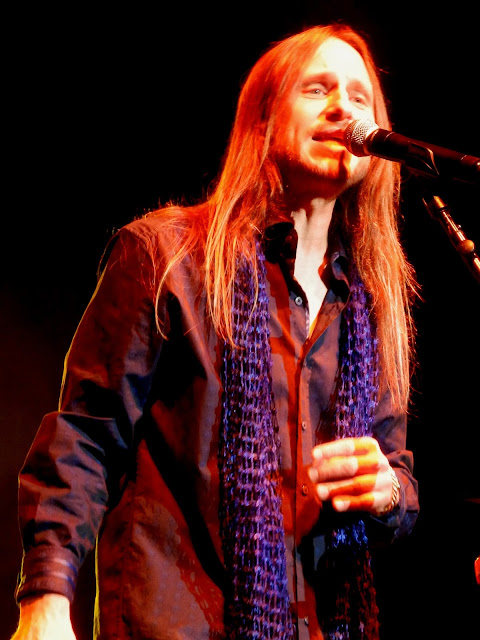 Jon had ditched the suit tonight and has gone for a smart-casual basket weave scarf thing. 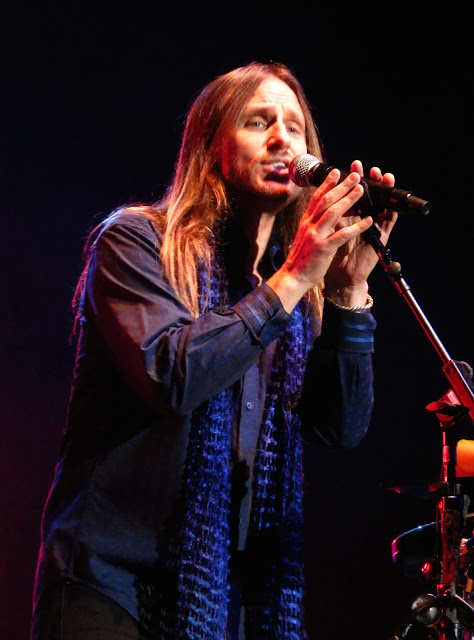 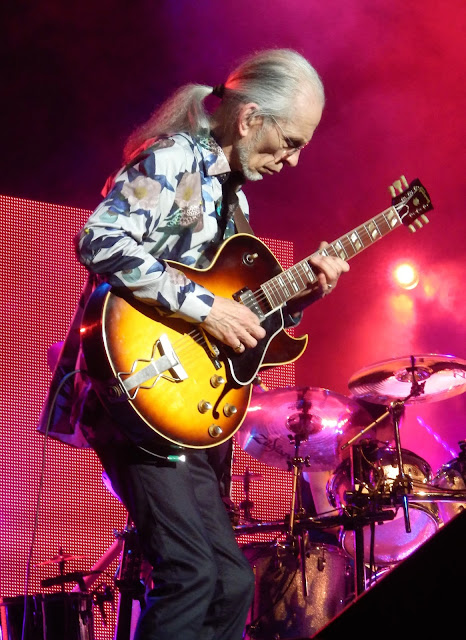 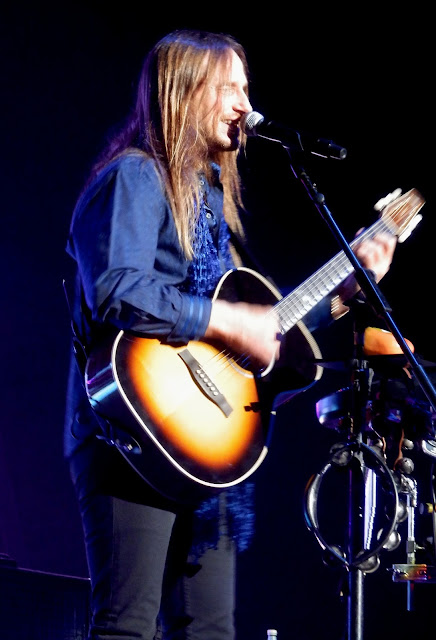 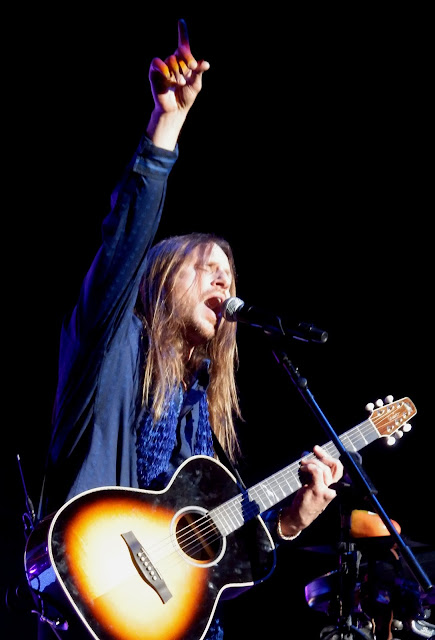 Nice shot of Geoff doing backing vocals.  I asked my son why he'd wanted to buy Geoff a drink (see Glasgow), and he said 'Because he's a decent guy, very humble'. 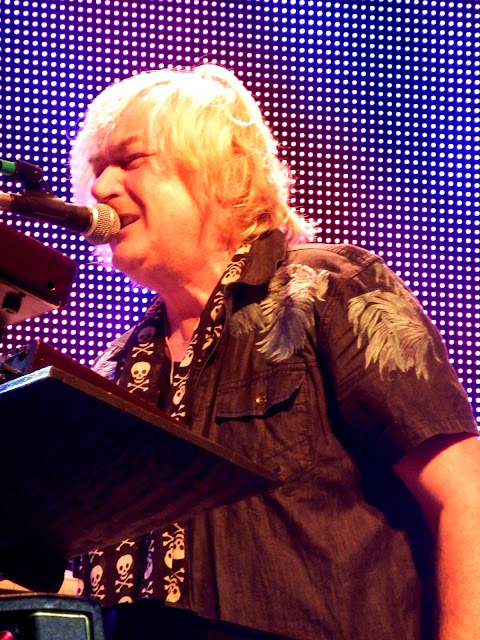 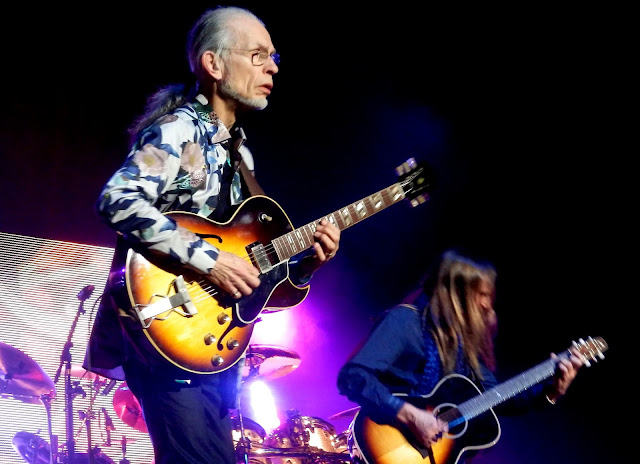 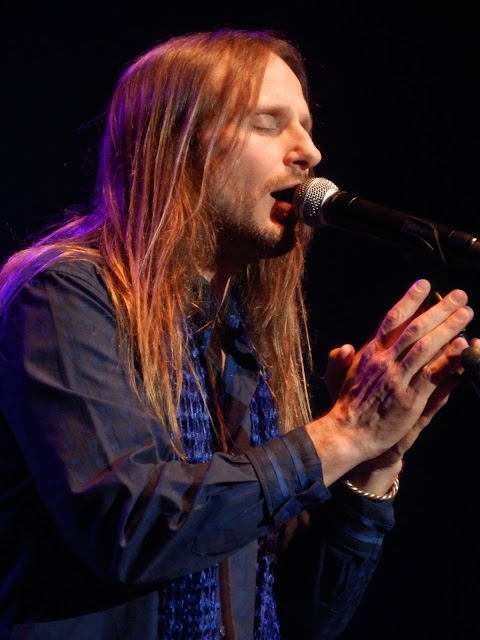 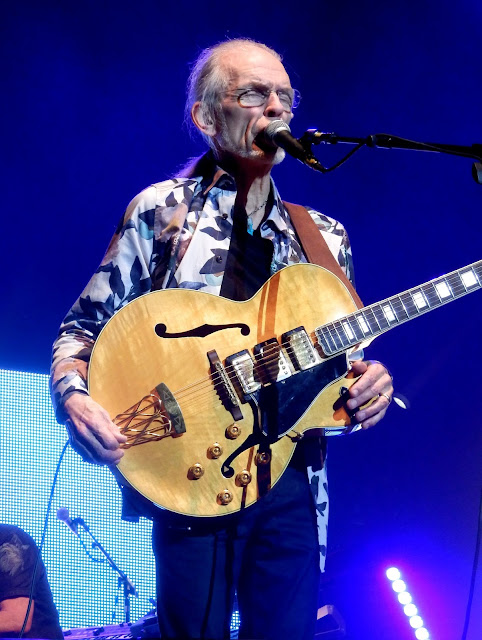 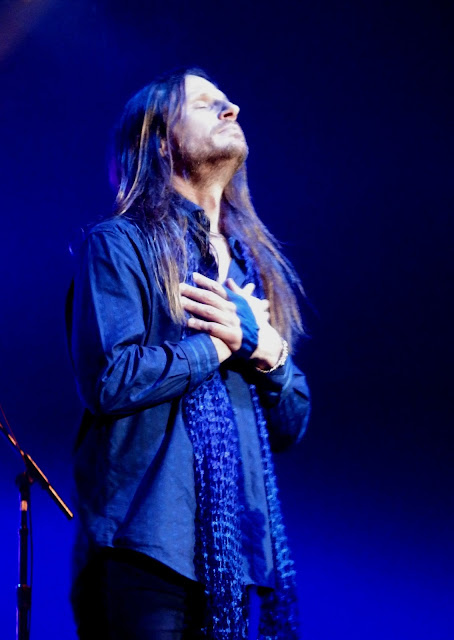 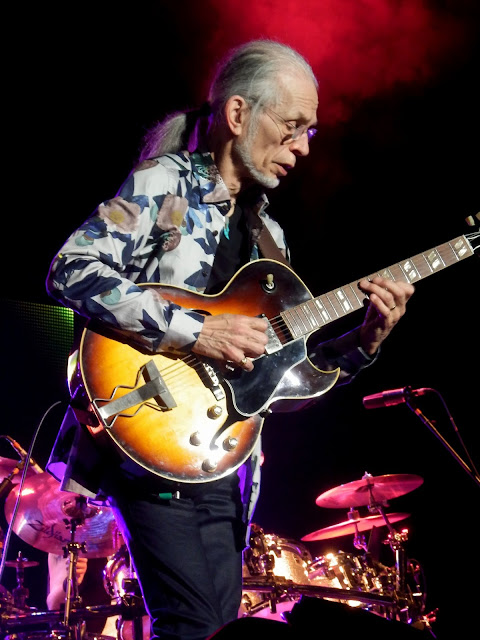 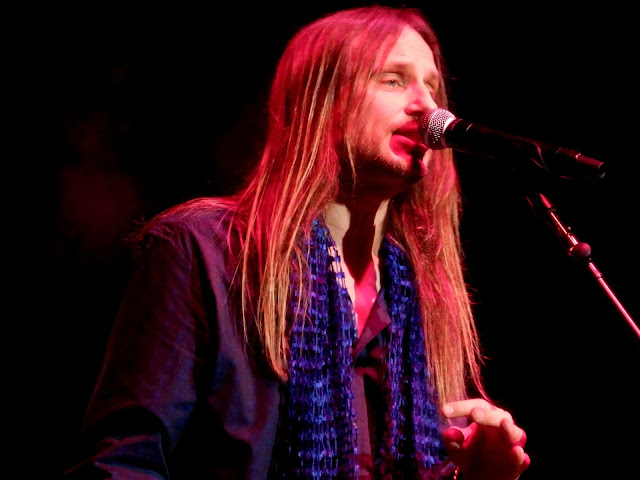 "Now this next song - plastic! Ecology!  All got to live together!  Wooh!" 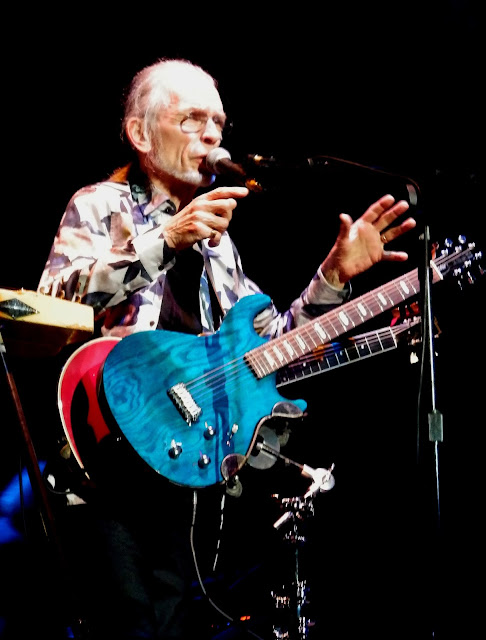 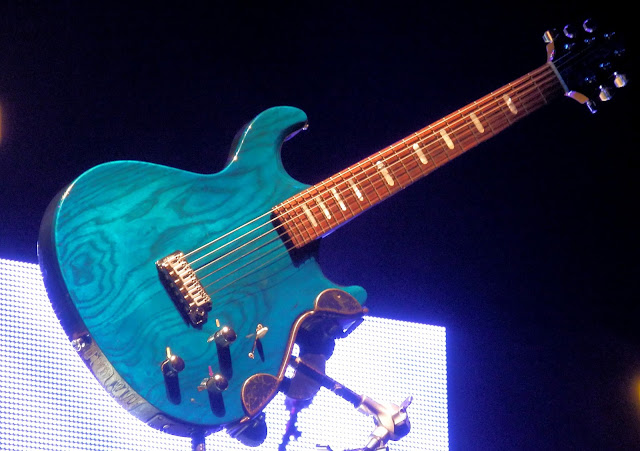 "Folllooooooooooow!"  Jon sings up to the note, and holds it effortlessly. 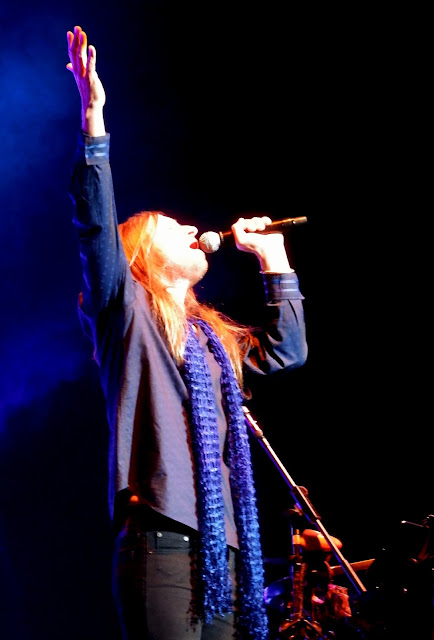 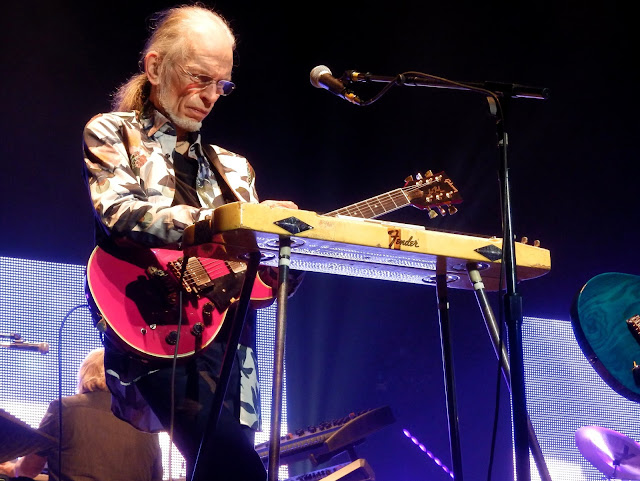 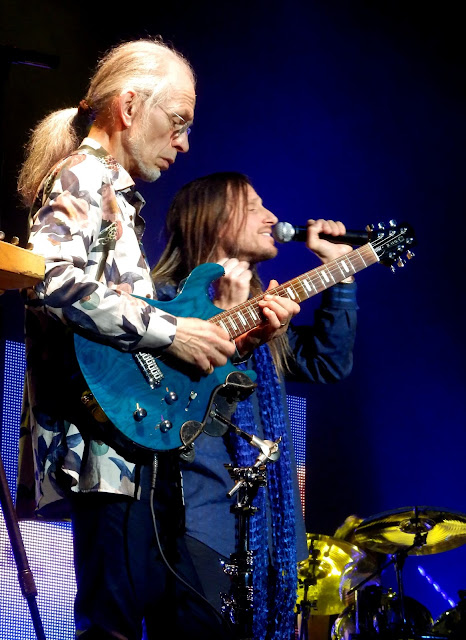 Lovely  picture of Steve leaning against a speaker stack at the side of the stage. 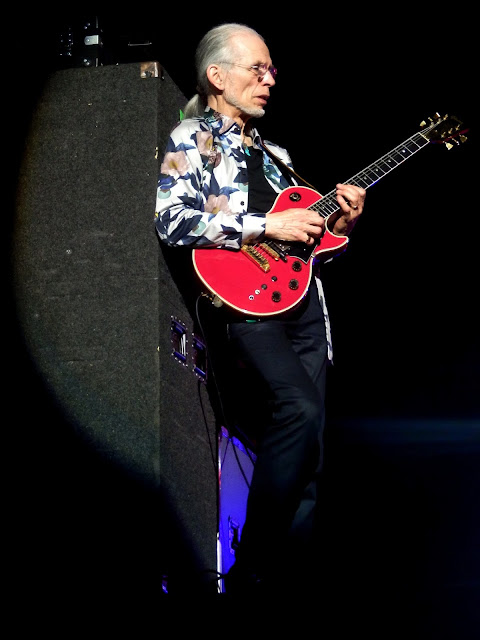 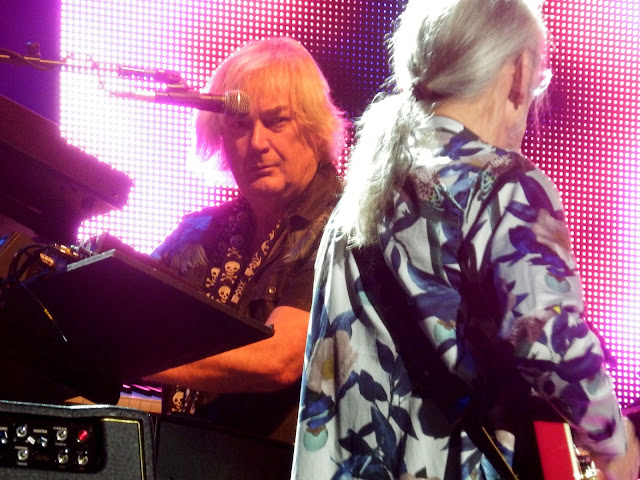 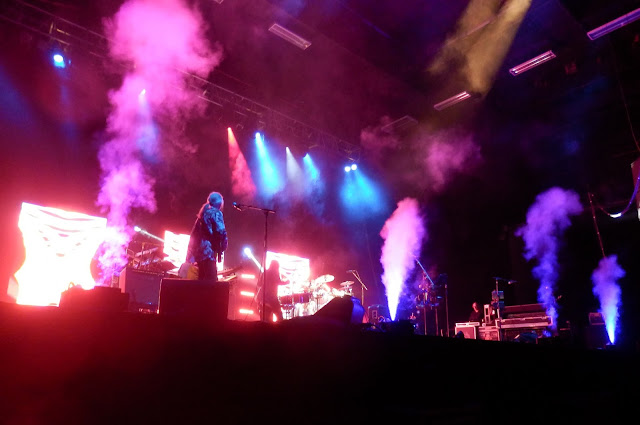 Now, there are no photos of the encore.  But do you know, out of that vast venue full of people, how many people stood during the encore?

And they were both Scots.
Posted by Judith at 13:42